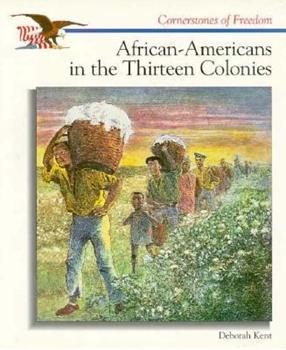 African-Americans in the Thirteen Colonies

Dramatic and defining moments in American history come vividly the life in the Cornerstones of Freedom series.

Clear presentation of a disturbing history for young readers.

Published by Thriftbooks.com User , 14 years ago
The first forty years after the first Africans entered the colonies as slaves, they were treated as servants working alongside Europeans. One African man named Sousa was even elected to the Maryland Assembly! This all changed as the need for a large, cheap labor pool grew. The 1600s saw laws giving African indentures their freedom taken away. The cultivation of labor-intensive crops increased the demand for slaves and thousands arrived every year. No matter what a slave's social standing at home, his status was equal with all the other slaves getting off the ship. Also, the African concept of slavery ending at the end of a time of service did not exist here. Potential for extreme profit triggered wars among African tribes and helped fuel the endless need for new captives. Shockingly, about ten million slaves entered the colonies from 1500 to 1800! That growing number of African-Americans in the colonies brought with it a growing fear of revolt and, therefore, ever more restrictive laws. After a 1712 revolt in New York City, slaves were burned at the stake for their involvement. Naturally, passive resistance became an effective tool because a slowdown could leave a plantation owner financially ruined. African-Americans in the Thirteen Colonies clearly presents the history of slavery to the modern struggle with discrimination. Onesimus, James Derham, Benjamin Banneker, Phillis Wheatley and other notable African-Americans are discussed. Illustrations, a glossary and timeline all add to the book's value. Deborah Kent's book is a tremendous asset to any student's understanding of a challenging and very disturbing subject. Highly recommended.

Published by Thriftbooks.com User , 14 years ago
The student's in special education enjoyed using this book to study social studies.
Copyright © 2020 Thriftbooks.com Terms of Use | Privacy Policy | Do Not Sell My Personal Information | Accessibility Statement
ThriftBooks® and the ThriftBooks® logo are registered trademarks of Thrift Books Global, LLC