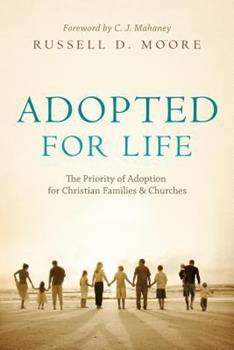 Adopted for Life: The Priority of Adoption for Christian Families and Churches

A manifesto calling Christians to adopt children and to equip Christian families going through the process. Offers biblical foundations for adoption and identifies adoption as a Great Commission priority in evangelical churches.

This is an excellent book! Helps you truly appreciate and understand adoption in Christ which helps

Published by P Watkins , 1 year ago
Adoption can become a priority for us. What does that look like? It looks like unity. The church seeing brotherhood and sisterhood instead of our fleshly identities.

Everyone needs to read this one

Published by Thriftbooks.com User , 13 years ago
Let me start out by stating that this is a great book. This is the best discussion of either adopting a child or the doctrine of adoption that I have ever read. Russell Moore writes as a theologian, pastor, father of four children (two adopted), and adopted son of God; and he appears to fill each of these roles better than most men fill any one of them. Furthermore, each of these roles was crucial to his writing this excellent treatment of the subject. First, this book fills a gap that has been left open for a long time: a wide market appeal to Christians for adopting because of our own adoption. I have heard others state similar claims, but until now, this information was scattered throughout my library of books and sermons in the form of random quotes and appeals. Moore offers a focused discussion that is just as useful for the seminary student as it is for potential parents. I will highly recommend this book to anyone considering adoption, discouraging adoption, or studying the theology of adoption. Second, this book weaves theology, biography, and appeal into a wonderfully engaging read. The first half of the book is heavier on theology than the remainder, but the entire book reads like an enjoyable discussion one might have over coffee or a beer. While this book does read like a story or conversation, it is a conversation not easily forgotten. Moore's story will cause tears and his appeals will bring conviction. He holds nothing back in sharing his experiences, and he makes no apologies as he preaches to his readers (I have a feeling that he has preached all of this to his local church). This book will make a difference in the life of each reader. His goal is clearly stated in the subtitle: to make adoption a priority for Christians and churches. A few quotes will make his aim even clearer, and should provoke everyone to pick up this book: "Our churches often don't "get" adoption, first and foremost, because they don't "get" God." "Adoption is not just about couples who want children - or who want more children. Adoption is about an entire culture within our churches, a culture that sees adoption as part of our Great Commission mandate and as a sign of the gospel itself." "Here's where, I think, the nub of the whole issue lies. Adoption would become a priority in our churches if our churches themselves saw brotherhood and sisterhood in the church itself rather than in our fleshly identities . . . Of course that's hard to imagine, when so many of our churches can't even get over differences as trivial as musical style." "Ultimately, this book isn't really about adoption at all . . . It's about Jesus." I believe this book will have a significant impact on many Christians and churches. Every pastor needs to read this book and communicate its truths to his church. Adoption isn't a priority for most churches, but it is a priority for God. If this previous statement caused some curiosity, then go read the book.

Published by Thriftbooks.com User , 13 years ago
Thanks, Dr. Moore, for bringing this great perspective to the important issue of adoption. This is a book that should be read by all Christians as they think of the Biblical mandate to care for orphans in James. As Dr. Moore says, whether you're called specifically to adopt or not all believers have a role to play in adoption. What a joy! Read this and you will be encouraged.

Published by Thriftbooks.com User , 13 years ago
In the years since I began reviewing books, I have read titles on a wide variety of topics. But it occurred to me as I considered Russell Moore's title Adopted for Life that I had never read a book that dealt entirely with adoption. Sure, adoption has factored into books on family and books on theology, but never had I read a full-length treatment of the subject. Having heard so much positive press surrounding Adopted for Life I thought it might be wise to give it a read. I'm glad I did. It might be easy to write off a book like this one, assuming that it only has relevance to families who are actually considering adopting a child. But Moore's ambition goes beyond asking young families to adopt orphaned children. "In this book I want to call us all to consider how encouraging adoption--whether we adopt or whether we help others adopt--can help us peer into the ancient mystery of our faith in Christ and can help us restore the fracturing unity and the atrophied mission of our congregation." As Moore explains, "The gospel of Jesus Christ means our families and churches ought to be at the forefront of the adoption of orphans close to home and around the world." It is the gospel that calls us to adopt but it is also the gospel that teaches us how to understand adoption. In fact, "as we become more adoption-friendly, we'll be better able to understand the gospel." And so this book is for anyone and everyone. It is important to note that this is not a how-to book; it does not provide step-by-step instructions for adopting (since there are already plenty of books that do just that and do it well). "Instead I want to ask what it would mean if our churches and families were known as the people who adopt babies--and toddlers, and children, and teenagers. What if we as Christians were known, once again, as the people who take in orphans and make of them beloved sons and daughters?" No one can claim that every person is called to adopt. But it does seem that all Christians are meant to think about the issue since we all have a stake in it. After all, God himself has a stake in it as the "Father of the fatherless" and the One who tells us that pure and undefiled religion is to comfort orphans. Through nine chapters, Moore first lays theological groundwork for adoption and then turns to matters that are perhaps just a bit more practically applicable (not that I wish to draw too firm a line between theology and practice). In the first chapter he explains why you ought to read the book, even if you do not want to. In chapter two he explains what some rude questions about adoption taught him about the gospel of Christ. After that he turns to what is at stake in this discussion and then gives pastoral counsel on how to know if you or someone you love should consider adoption. He looks to practical aspects of navigating the adoption process (reassuring readers that it is not nearly as bad as most people seem to believe it is) and then covers some of the uncomfor

One of the best books I have read on adoption

Published by Thriftbooks.com User , 13 years ago
My wife and I are currently going through the adoption process and as a Christian I have been very disappointed with most of the books on adoptions that I have read. Not all, but many books are humanistic and have little regard for God's role in the adoption process. With "Adopted of Life" Moore does an amazing job of looking at the link between a physical adoption and spiritual adoption while also weaving in him and his wife's own story of their decision to adopt. I laughed and cried as I read this book and gained much insight from it. Dr. Moore does not look on adoption as a negative experience as many authors do but instead focuses on God's grace and plan in the adoption experience. One of the best books I have read, you won't be disappointed.

Published by Thriftbooks.com User , 13 years ago
Adopted for Life is a compelling, thought provoking book that looks at a theology of adoption. Moore is the dean of the School of Theology and senior vice president for academic administration at the Southern Baptist Theological Seminary. This is a very readable book that links adoption and the gospel in persuasive way. Moore has thought deeply about the doctrine of adoption and its intrinsic relationship to the gospel. He has also thought very deeply about adoption as a reality in today's world. He and his wife have adopted two boys and are walking through the process of raising their family. His insights are moving; his style is gripping. As a pastor with families that have adopted, it has given me a fresh understanding of how to apply the gospel in that context. The first part of the book is densely packed with parallels between the gospel message and adoption. The final chapters deal with some of the issues that adoptive parents face during the adoption process and after, as they raise their families. Dr. Moore is passionate about this topic and he is very thoughtful of his exposition of pertinent Scriptures. That makes for a credible read. My eyes filled with tears more than once as I considered this vital topic. I highly recommend this book for potential adoptive parents, for grandparents, for pastors, and for thoughtful Christians who want to be biblically informed regarding this topic.
Trustpilot
Copyright © 2022 Thriftbooks.com Terms of Use | Privacy Policy | Do Not Sell My Personal Information | Cookie Preferences | Accessibility Statement
ThriftBooks® and the ThriftBooks® logo are registered trademarks of Thrift Books Global, LLC