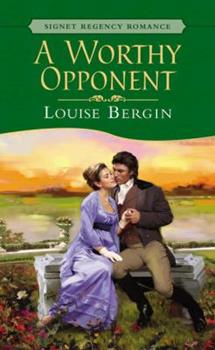 Miss Judith Shelton will be the first to admit she is a fortune hunter, but she only has her orphaned siblings' best interests at heart. Luckily, the sensible Judith has no romantic notions of love-until she meets the cunning friend of the man whose fortune she is hunting.

Worthy in every way

Published by Thriftbooks.com User , 17 years ago
Miss Judith Shelton is desperate. Her uncharitable uncle has not answered her pleas, and she wants a better future for her family. If she marries a rich man, her younger sister will have the opportunity to have a London season. When Viscount Westfall comes to Chesire, she has the notion to get him to marry her... even if that means resorting to desperate measures. So, Judith throws herself in front of the viscount's carriage, martyring herself for the sake of her family. Her plan works. Westfall invites her into his carriage and asks to see her again. But there was one thing Judith DIDN'T plan. Another man was with Westfall that day. That man is Peregrine Campion, Westfall's friend and business partner. Peregrine sees through Judith's plan, and they instantly start butting heads. He is a very big hitch in her plan--along with several other little hitches. She keeps coming into contact with Peregrine, who reads her like a book. He gets a glimpse of the real Judith, and she eventually gets a glimpse of Mr. Campion, as a man haunted by his past. I enjoyed this book very much. How anyone can give it anything less than 5 stars, I have no idea. It's a very sweet story--the best I've read in a long time. This is Louise Bergin's 2nd book, and I think she's THE best new writer out there. She's very intuitive. The way she fleshes out her characters is masterful, and you want to see them succeed. More than once, "Worthy Opponent" reminded me of a Jane Austen book, not only because of the time period. I've read a million Regencies, and they never put me in the mind of Jane Austen. Louise Bergin's way of storytelling is what moved me. The ending was perfect... I only wish it would have been a bit longer. Highly recommended. (And I'm a tough critic)

Published by Thriftbooks.com User , 17 years ago
The Shelton women have fallen on hard times and money is desperately needed to fund a London Season for the younger and beautiful Miss Sarah Shelton and for the education of young Charles Shelton. And since the head of the family, a distant relative, has seen fit not to pay any attention to the needs of Judith (the eldest sister), Sarah, Charles and their aunt, Tillie, Judith Shelton has decided to catch their neighbour, the wealthy and eligible Viscount Westfall, for a husband. But the one thing she hadn't taken into consideration was the affect that the intelligent and determined Peregrine Campion, a business partner of Westfall's, would have on her plans, or how his resolve to thwart her would both exhilarate and dismay her. Nor had she counted on much Peregrine would make her question her schemes and make her wonder which gentleman it was that she was truly a match for...Once again Louise Bergin has penned a novel that is a little out of the ordinary. "A Worthy Opponent" starts off as many Regency-era romance novels do: a young beauty determined to snare herself a rich husband through fair means or foul because of her impoverished circumstances. But then the authour's genius steps in, and the plot is tweaked away from the usual through a set of plot devices that necessitates the heroine and the (true) hero spending more time with each other and getting to know each other's character intimately. So that halfway through the novel, we and the novel's principal characters know that they are meant for each other. What follows is a swiftly paced second half of the novel where the hero, with our Judith's help, comes to terms with his painful past and puts a few ghosts to sleep. On the whole, everything was very well done: the story development and the smooth pacing -- although, aside from Judith and hero, the other characters were a little two dimensional, however since both they were the novel's focal pair, this was not too much of a detraction. However while I did like "A Worthy Opponent," I did think that the novel lacked a certain cohesiveness -- it did read like a novel with two very distinct plots, that were loosely tied together via certain plot threads. Also, I did think that this book lacked the emotional depth and intensity that the authour's first novel, "The Spinster and the Wastrel" possessed. On the whole though, "A Worthy Opponent" was a nicely done romance novel that possessed a refreshingly different slant on an old plot device. A good 3 1/2 star read.
Trustpilot
Copyright © 2022 Thriftbooks.com Terms of Use | Privacy Policy | Do Not Sell My Personal Information | Accessibility Statement
ThriftBooks® and the ThriftBooks® logo are registered trademarks of Thrift Books Global, LLC