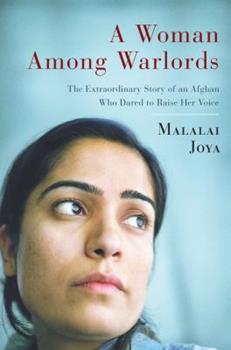 A Woman Among Warlords: The Extraordinary Story of an Afghan Who Dared to Raise Her Voice

In the tradition of Ayaan Hirsi Ali's "Infidel," and also the subject of an award-winning documentary, this impassioned, first-person account tells of a courageous young Afghani woman who risks her life by denouncing the powerful warlords in her country.

"It was a challenge to learn to eat icecream under the burqa".

Published by Thriftbooks.com User , 13 years ago
Malalai Joya has written a lucid book called "A woman among warlords-The extraordinary story of an Afghan who dared to raise her voice.".In it she tells of her upbringing during the war in Afghanistan in the 1980's. She describes how the family had to flee the fighting and live in dangerous conditions in Iranian refugee camps where many Afghans where persecuted. Then the family took refuge in Pakistani refugee camps where many of the Afghan orphans would later be recruited into the Taliban. After the Russians are driven out of Afghanistan with support from America the country is left to be ravaged by opposing factions of brutal warlords. The stories that Malalai reports here are incredibly brutal, with rape and murder becoming a commonplace thing in the Afghan scenery at this time. Some of these warlords who fought for power between 92 and 96 when the power vaccum developed would later become part of the new Afghan government under Hamid Karzai that America and Nato now support. The Soviet empire had bombed and killed their way all across Afghanistan and now the warlords fighting was continuing to tear the place appart. Finally the Taliban took power in 98 and this brought some inital stability to the country but at a high price. Human rights suffered immensley as well as womens rights. Malalai went back into the country to start teaching the women reading and writing in underground schools. The Taliban misused Islam too and crearted a set of medieval, repressive rules in the name of their religion. She took risks teaching these classes but local Afghans demanded it, not wanting their girls to lack education. Many of the fun things for people had to be done on an underground level. Malalai recounts: "It was a challange to learn to eat icecream under the burqa". Women would meet and dance together in each others homes, wear makeup or western style clothing under their burqas, or have "Titanic parties" where people would meet up at secret parties and watch the popular film Titanic together. Ofcourse after the Taliban fell in 2001 the first hing that happend was that people went out and bought DVD players and stereos, with music blasting on every street corner. After the tragic events on 9/11 Afghanistan was now under an attack from the US army and NATO. The goal was to get rid of the Taliban government and catch Bin ladin and his ALQaida men. Civilians in Afghanistan first felt liberated but then eventually betrayed when the old warlords who had been driven away by the Taliban started to return to power with US and NATO backing. On november 19th 2001 the New York times wrote that "The galaxy of warlords who tore Afghanistan apart in the early 1990s and who where vanquished by the Taliban because of their corruption and perfidy are back on their thrones , poised to excercise power in the ways they always have." Now old warlords like Dostum and Fahim came back to power at the dread of many Afghans. Sensing that a critical voice was needed within th

Published by Thriftbooks.com User , 13 years ago
The story of Mlalai Joya, a young Afghan woman who fearlessly speaks out on the true situation in Afghanistan today; the injustices and especially on the corruption; she speaks of warlords and corrupt men in the government naming names and pulling no punches, AND SHE IS STILL LIVING IN AFGHANISTAN! It is amazing she is still alive, but there is no doubt in my mind that she will soon be martyred. You have to admire someone willing to lay down their life, especially at such a young age; this book moved me deeply, EVERYONE IN OUR STATE DEPARTMENT SHOULD READ THIS BOOK; I wish Obama and Hillary Clinton had. The only criticism I have is that it could have been improved with more editing, but that is o.k., passion is passion.

Published by Thriftbooks.com User , 13 years ago
One of the most important, impassioned, and informative books I have ever read. This is the story of a teacher, activist, and parliamentarian in Afghanistan (and later throughout the world) who has fought against warlords and misogynists oppressors and occupiers of all sorts throughout her young life. If you want to REALLY know what the history of Afghanistan was, what is going on there now, and most importantly what YOU can do then there is no other book you should before this one...

Published by Thriftbooks.com User , 13 years ago
This is the extraordinary story of an Afghan Woman who details her life as a child living in different refuge camps and later as a young woman fighting undergrown to educate women in the era of the Taliban. The author goes on to describe life now in Afghanistan and how hard the Afghan people still need to work in order to achieve true democracy and equal human rights for women. Malalai Joya denounces the misrepresentation of the current "democratic government" and their attempts to silent her. This book is an eye-opener and a truly inspiring story.

Published by Thriftbooks.com User , 13 years ago
This is an excellent overview of the recent history of Afghanistan from the first hand experience of Malalai Joya and the story of a courageous advocate for Afghan freedom and independence. A must read book for anyone interested in the current policy debate. Other books recommended by Malalai Joya on the subject include Bleeding Afghanistan (Kolhatkar), Descent into Chaos (Rashid), and I is for Infidel (Gannon).
Trustpilot
Copyright © 2022 Thriftbooks.com Terms of Use | Privacy Policy | Do Not Sell My Personal Information | Cookie Preferences | Accessibility Statement
ThriftBooks® and the ThriftBooks® logo are registered trademarks of Thrift Books Global, LLC