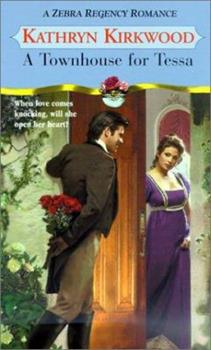 by Kathryn Kirkwood and Joanne Fluke

Upon the death of her grandmother, Tessa Lockhard receives a faded letter and brilliant pendant--and learns she was adopted at birth. Tessa heads to London with the knowledge and that on her 21st birthday, which is just days away, she will learn the truth about her past. She never expects that she is the daughter of a countess or to fall for the charms of handsome Harry Fallbrook.

Published by Thriftbooks.com User , 21 years ago
Successful businesswoman Samantha Jones gets the emergency call just minutes before an important meeting with her boss, Cal Tremaine. Her sixty-nine-year-old grandmother has had custody of Kippy since the baby's parents died just before Christmas. Now her grandmother is hospitalized, and her niece placed in temporary foster care. Somehow Samantha must balance Cal's substantial staffing needs and her own personal crisis.When the call comes, Samantha knows it would be irresponsible to walk out forty-eight hours before the massive screening process at a recruitment open house. She hadn't come aboard Cal's company for the generous salary, but for the promise of a seat on the board after two years if she does an effective job. Walking now would jeopardize her goals, and make her personal life very public. Samantha has maintained a strict distinction between the two, not even telling her boss about her sister's death five months ago. The careful distinction allows Samantha to remain in perfect control of her life; something she refuses to give up. But control has suddenly been wrenched from her grasp by way of circumstance, and Samantha doesn't quite know how to cope. Especially when Cal insists upon helping. Cal's fascinated and impressed by the woman who put his company in shape. After being burned by his previous partner, Cal had been hesitant to bring in high level help, but Samantha had quickly demonstrated her proficiency at organizing and delegating, making a remarkable difference in the success of the company. Samantha seems to have no personal life, spending eighteen hours a day on work if needed. He admired her ambition and drive, and believed her too valuable to risk a temporary romance, despite his attraction. Then he sees her barefoot, hair down to her waist, holding a baby, and everything changes.I find romances refreshing when the guy falls head over heals first, and spends most of the novel convincing the girl that he's right for her. Watching this hero convince his lady love is hoot! Further, as a member of the Information Technology industry, I find a delightful humor in the references to the industry, such as developers don't like stodgy companies, and outdoing IBM. But fear not, folks who don't know what a developer does will still find THINK ABOUT LOVE a high powered romp not to be missed! Highly recommended.
Trustpilot
Copyright © 2022 Thriftbooks.com Terms of Use | Privacy Policy | Do Not Sell My Personal Information | Accessibility Statement
ThriftBooks® and the ThriftBooks® logo are registered trademarks of Thrift Books Global, LLC