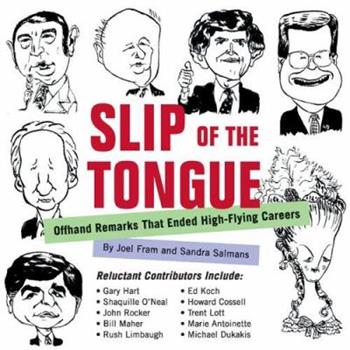 A Slip of the Tongue

by Joel Fram and Sandra Salmans

Here is a hilarious compendium of ways in which the high and mighty have fallen-straight from their own mouths. In the spirit of The Darwin Awards, and drawing from leaders in the business, political, and sports arenas, Slip of the Tongue provides a painful panoply of remarks that have derailed careers and soiled reputations. Reluctant contributors include Rush Limbaugh, Bill Maher, Shaquille O'Neal, John Rocker, and Gary Hart. Each quote is accompanied...

Published by Thriftbooks.com User , 14 years ago
Reading this little book brought back memories of some of the wonderful gaffs that have occurred in public over the last 25 or so years. Some of the featured "speakers" are perennial favorites that misspoke almost every time they opened their mouths, and some are one time wonders. Either way, the people featured here had a severe case of foot-in-mouth disease and suffered the ultimate penalty....banishment from the public eye. I really enjoyed the book and thought it was a lot of fun for a quick read. Just don't expect a long read or a lot of explanation. Do expect to chuckle!

Sometimes it does pay to think before you speak, especially when your career is on the line

Published by Thriftbooks.com User , 15 years ago
As human beings, we all say things that we regret ever opening our mouths to say in the first place. However, if your job is in the public eye & you have millions reading, hearing or seeing what you say, it goes double to watch your mouth or the fame you worked so hard to build can go down in flames. A SLIP OF THE TONGUE not only shows just how badly loose lips can sink a famous person's ship, but may even make the average reader glad their verbal gaffes are not captured for all to see. Even I admit I speak before I think sometimes, but reading the anecdotes in A SLIP OF THE TONGUE certainly makes my slip-ups seem tame & merely laughable. I can apologize for speaking wrong & move on. When you are famous, though, apologizing is not enough to save your career, image or self-respect. The public has come to expect something from you, and one little stray remark can turn someone from an ally to an adversary. Reading this book has even made me thankful that I am not a celebrity. Most of the misspeaks in A SLIP OF THE TONGUE are of the politically incorrect variety that some people may deem examples of political correctness gone berserk, but I rather deem as just failures to practice simple common sense. Naturally, things said by John Rocker, Marge Schott, Trent Lott & Earl Butz (to name just a few) still go down in history as racial insensitivity, ne plus ultra. In the case of the first two, they apologized (how sincere was a matter of debate) for their remarks & got to keep their jobs, at least until their next verbal misstep. The last two seemed to show no remorse for their thoughtlessness (again, sincerity was questionable at best), and fell from grace faster than a stone. In particular, Butz's remark is still jaw-droppingly racist & shortsighted 30 years after it was first uttered, and I will certainly not recount it here (the fact he is from Indiana is enough to make me ashamed to be a Hoosier; in fact, I would like to apologize myself on behalf of Indiana for Butz's "masterpiece" of racial nearsightedness). But it is safe to say that even Butz's fellow Republicans began to disown him overnight. Even slips of the tongue involving sex are enough to stop a promising career dead in its tracks. A SLIP OF THE TONGUE recounts those still infamous to this day (presidential candidate Gary Hart) & also those the public may have forgotten (CBS golf announcer Ben Wright & U.S. Congressman Martin Hoke). No amount of apologizing could redeem them, and they quickly became professional pariahs overnight. These stories in particular demonstrate the authors' fearlessness in proving just how foolish the speakers were in letting their lips do the thinking for them. Whether or not you like political correctness, you have to admit being sensitive to one's feelings is probably the best way to keep one's job, and yourself away from a sexual harassment suit. Other stories A SLIP OF THE TONGUE recounts involve misspeaks that were just plain inappropria

Published by Thriftbooks.com User , 15 years ago
"A Slip of The Tongue" is great fun...I'd highly recommend it. The writing is clever and funny, but what really made this book for me were the wonderful caricatures done by Richard Beckerman. Beckerman's playful and beautiful portraits have a richness and quirkiness, which is the perfect compliment to the text. If the stories don't have you laughing out loud, the art work will.

This book is a hoot!

Published by Thriftbooks.com User , 16 years ago
I love this book, and I'm getting a bunch to give out as Christmas and birthday presents. Highly recommended.
Copyright © 2022 Thriftbooks.com Terms of Use | Privacy Policy | Do Not Sell My Personal Information | Accessibility Statement
ThriftBooks® and the ThriftBooks® logo are registered trademarks of Thrift Books Global, LLC