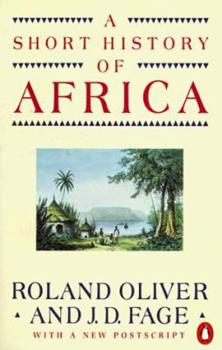 During the 20th century the centre of the world shifted. The dramatic alterations in political power have corrected the vision of a European-centered world. Where the centres of European culture flourished, decayed and sprouted in turn, empires in Africa rose, ruled, resisted and succumbed. Much of Africa's past has now been excavated from ignorance and error, revealing a rich and previously little known human heritage.

Published by Thriftbooks.com User , 14 years ago
The authors did a great job. They could have made this too high-level and impossible to understand for those who don't have enough background in African history, but they haven't. They could have made it too simplistic and abbreviated so that the reader would be missing important information, but they haven't either. They found just the right balance and the right approach to cover the entire history of Africa without dwelling on any details for too long and without skipping anything that would prevent the reader from getting a good understanding. In some chapters, the book is a little heavy, but you can't put that much information without it feeling dense sometimes. Whenever I found one chapter a little too much to handle all at once, I simply re-read a few of its pages and I was ready to move on. I must say, I would recommend this book to anyone looking for a primer on African history, I learned so much from it. The only parts I wish they had given a little more information on are the former colonies of Italy and Spain. In particular they didn't say very much about Somalia, Libya, and the Spanish colony west of Morocco.

Published by Thriftbooks.com User , 19 years ago
The first domestication of animals and cultivation of cereals occurred in south-west Africa. The oldest cereal crops of sub-Saharan Africa were the millets and west of the great bend of the Niger there was also rice. Maize and cassava were introduced from South and Central America in the 16th and 17th centuries. The ancient languages were Hamito-Semitic languages of the north and north-east, click languages of the Bush and Hottentot peoples, and the Eastern Sudanic languages and Western Sudanic languages. The Bantu languages spoken today are closely related to each other. The introduction into Aftica of South-East-Asian food plants, for example the banana and the yam, made possible the growth of dense populations. There was a great expansion and dispersal of Bantu farmers. The idea of kingship probably originated in Egypt. The organizational efficiency caused the politco-religious ideas to be widely distributed. Trading expeditions had an effect on the material culture of a wide region. Then Egypt declined. It had neither iron or ore. Northern Kush had ore but no fuel. The southern region had both commodities. Meroe could provide for its own subsistence and trade and conquer in the Sudanic belt of Africa. As to the Sudanic civilization, the typical state was not feudal, it was bureaucratic. Around the royal person there formed a galaxy. The book goes on to detail Africa's encounter with the Mediterranean world and then with Islam. Trading in East Africa and West Africa is delineated carefully. Ihe slave trade did not create disequilibrium until late. European colonization was not substantial until the the last quarter of the nineteenth century when matters became frenzied as each country sought to assure itself of a piece of the action. Prior to that, European missionary efforts had been fairly widespread. Following World War I the German territories were governed under mandate through the auspices of the League of Nations evidencing a principled undertaking on the part of the colonial powers. Decolonization took place rapidly following the establishment of Ghana in 1957. The book is chock full of information and descriptions of the African peoples and kingdoms and modes of government and influences and the movements of various groups over time. The maps are useful.

Published by Thriftbooks.com User , 23 years ago
I read the 1966 (second)edition of this volume and was not aware of updates until opening this site. Despite much political and demographic change in Africa over the last 30-odd years, and despite the availability of much more research and the advent of DNA-based studies, not even heard of in 1966, I found Oliver and Fage's work a pleasure to read. Their chapters are intelligently organized, the flow of ideas and trends unblemished by superfluous detail or tedious asides. The entire continent is covered, North Africa as well as Sub-Saharan, though personally, I felt a little more could have been said about Madagascar. As a reader without a professional stake in African history, I found this book just the thing. It raised many issues that I had not thought of, told me about many patterns and issues of which I had known nothing, and did so in clear, concise language which kept my interest throughout. I strongly recommend this book to anyone interested in African history. I myself will look for an updated edition to see what the authors say about the last third of a century.
Trustpilot
Copyright © 2022 Thriftbooks.com Terms of Use | Privacy Policy | Do Not Sell or Share My Personal Information | Accessibility Statement
ThriftBooks® and the ThriftBooks® logo are registered trademarks of Thrift Books Global, LLC