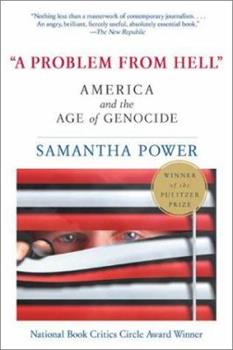 A Problem from Hell

Published by CK , 2 years ago
Book listed as “Like New”. I’m a bit disappointed the book’s condition was misrepresented. Book is worn, cover wrinkled and there is writing throughout. Not even close to “Like New” I wouldn’t have purchased this edition if I’d known.

Published by Thriftbooks.com User , 18 years ago
Many of the negative reviews of this book have either decried it for depicting the Armenian genocide or dismissed it as liberal hackery. Both of these objections are spurious. Power has duly researched the Armenian genocide and simply documented the American and international responses to it. Many of the objections actually try to implicate the Armenians as provoking the Turkish authorities into the genocide, while others deny anything took place at all.As for the charges of a liberal bias, absolutely none exists. And I wonder if anyone who alleges it has actually read the book. One reviewer actually calls Power a communist sympathizer for not reporting on Chinese and Russian atrocities. This absence is understandable when one looks at the fact that American legislators never missed an opportunity to wave moral superiority over Russian and Chinese communists. We almost always criticized them for that sort of the thing. Hell, one of the main reasons for the passage of the Helsinki convention was to be able to criticize the communists for failing to live up to its ratification. There is no liberal bias in this book. Power lauds Republican presidential candidate Bob Dole for making the Balkan genocides a campaign issue, even going so far as to buck the many dissenters in his party. Indeed, even Jesse Helms receives a paean for calling on the Clinton administration to apprehend war criminals. Clinton himself receives a hearty dose of criticism for his languid responses to genocide in Rwanda and the Balkans.This book is brilliant. Anyone curious about the heroes and villains of twentieth century genocide will be satisfied after reading this.

A must read for concerned citizens

Published by Thriftbooks.com User , 18 years ago
It seems that instances of genocide are increasing as the world becomes a global community. This excellent book undertakes several case studies of genocide and asks why the world's countries, and the US in particular does not respond to prevent such acts against humanity.If you dont think this book is necessary, see the review by justreviewingit below which calls the Armenian genocide the "Armenian Relocation"; this reviewer is an apologist for Turkish genocide. Holocaust deniers come in all forms and must be confronted with their evil. This book will help you do thatwhen you hear " Pol Pot wasn't all that bad".

Published by Thriftbooks.com User , 19 years ago
"A Problem From Hell" is what Secretary of State Warren Christopher called the Bosnia war. After the author, Samantha Power, reported on that war, she studied the beginnings and ends of some other major genocides of the 20th century. This book is her report, and it is stunning, not as an indictment of anyone, but as a revelation to us all. First, the beginning: Genocide begins with the policy choice of a man in command of a sovereign state to achieve state aims by killing pre-identified citizens. The book details the policies of the Young Turk Mehmed Talaat Pasha, Hitler, Pol Pot, Saddam Hussein, Colonel Bagosora, and Slobodan Milosevic. Second, the end: Genocide cannot be prevented or ended from the outside if respect of national sovereignty trumps other values, which it usually does. Even if international effort or an invasion from the outside runs over national sovereignty, genocide is unlikely to be stopped unless the suffering is personally witnessed. Genocide stops when individuals who MUST fight evil act to end it. The book tells the uplifting story of a number of heroic individuals who became political Good Samaritans to help the victims of genocide. The first of these was Raphael Lemkin, who coined the work "genocide." Read the book to find out who the others are -- you will be pleased and surprised to learn of the actions of some very selfless Americans.This book was the parable of the Good Samaritan writ large. Most of us choose to walk by on the other side of the road when the thief attacks the victim, the better not to see the victim's terror and suffering. This book should jolt us out of that habit, and if you opposed our invasion of Iraq, you might find solace in knowing that we deposed a perpetrator of genocide.

Why History Repeats Itself

Published by Thriftbooks.com User , 19 years ago
During and after World War II, it slowly dawned on the world that the terrible tragedy of the Holocaust must never be allowed to happen again. With many books, films, speeches, memorials, etc., educating the public about the horrors of genocide, surely the international community would stand up and confront genocide in the future. Right? Well, guess what? Genocide has happened many times after the Holocaust and America, the United Nations, and other countries did nothing to prevent it. How did the world(and especially America) allow this to happen? What is Genocide exactly? What political issues erect roadblocks to something so morally indefensible? This book answers all these questions in a very engaging and informative way.Samantha Powers has done an excellant job researching the origins of Genocide in the twentieth century; how it came to be ratified by the United Nations, and why America was one of the last countries to enact legislation to support it. Also, she reviews the ineffectiveness of the United Nations in preventing Genocide in Iraq, Rwanda, Kosovo, etc. This book is not a dry, academic study. It is very enaging and well organized. My hope is that we will not stand by silently anymore while brutal dictators like Saddam Hussein commit Genocide. Somewhere there is another Anne Frank waiting...hoping...praying silently that someone will help protect her basic right to life.
Trustpilot
Copyright © 2022 Thriftbooks.com Terms of Use | Privacy Policy | Do Not Sell or Share My Personal Information | Accessibility Statement
ThriftBooks® and the ThriftBooks® logo are registered trademarks of Thrift Books Global, LLC