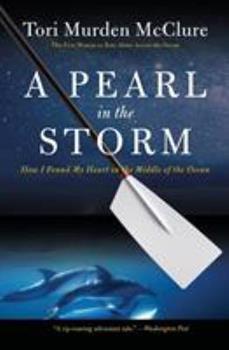 A Pearl in the Storm: How I Found My Heart in the Middle of the Ocean

You must read this!

Published by Thriftbooks.com User , 13 years ago
You must read this! Tori Murden McClure has written a terrific memoir focused on her effort to become the the first woman to row (yes, I said row) across the Atlantic. Her description of her trip ranges from the mundane to the sublime to the terrifying (she had the misfortune to make her attempt in what would turn out to be one of the worst hurricane years on record). Her descriptions of encounters with whales, dolphins, sharks, and seabirds make one want to follow in her footsteps, but the difficulty and and peril of her journey provide more than a dose of reality. But the book is much more than an adventure tale, which is what elevates it to must-read status. Interspersed with tales of the grit and determination she showed on her trip is the story of her life, a woman fiercely protective of her developmentally disabled brother, athletically gifted and determined, striving for knowledge (a bachelor's degree from Smith College, a Masters in Divinity from Harvard, and a law degree from the University of Louisville), and most of all, looking for her place in the world.

Some people were born to take a beating...

Published by Thriftbooks.com User , 13 years ago
from life. Not that they deserve a beating, it's just that they come into this world saying, "Bring it on." They don't sit on the edge of the universe murmuring, "I wonder what life holds? I'm not sure if I'm strong enough to face it." Instead they say, "I don't give a care if I'm strong enough, I'm jumping in and I'm going to make a difference." And when they get bruised, you won't hear them whine. As a matter of fact, they're just a wee bit proud of those contusions. It's not that they're looking for trouble, they're just trying to set their corner of the world straight. While most of us are running for cover or dialing 911, they're running full throttle toward danger and giving the bottom feeders a piece of their mind and a fist to the mouth. They don't fight for the sake of fighting. They are the defenders of the those without voices. They know life isn't going to be good to the "weak", so they are going to do some equalizing by all means available to them. Tori Murden McClure is one of these people. She is clear thinking and passionate. Her brother Lamar is the driving force behind her mission to set people and the system straight. She fought for him nearly every day of her young life. Every child with learning challenges should have a sister like Tori. She is a role model that all children can look up to. Not because of her rowing skill, but because she was unwilling to let her brother's bullies have the power. So many kids feel powerless and unequipped to break away from the crowd and defend the weak. Tori never felt that conflict. If anyone can take a beating from the Atlantic during hurricane season and not lose their mind or their heart, it is Tori McClure. Her internal navigation system is true and her sanity is not swayed by uncontrollable circumstances. If she were a stockbroker in the depression, she would not be jumping out the window, she would be putting out a net, and setting the jumpers straight! What can I say? I love this book, I love the people in her life, and I love Tori's spirit. I wouldn't be surprised if she and Amelia Earhart were related.

Published by Thriftbooks.com User , 13 years ago
A Pearl in the Storm is a fantastic read. With the prerequisite white knuckle moments of a good adventure book, it draws you in and keeps you there. Tori Murden McClure sweeps the reader along as she attempts to become the first woman to solo row the Atlantic Ocean. I found myself gripped with apprehension as the communication systems went out, bracing for the next big wave, and pondering, as the author does, about when she would need to call for help and abandon her quest. However, to categorize this book strictly as an adventure book would be a mistake. It is first and foremost a book about human nature and the internal battles we all fight in the course of our lives. Whether you are a scholar, an athlete, both (like Tori) or neither, this is a universal experience. Through the seemingly impossible goals the author sets for herself --- whether it is through her academic endeavors, career choice, or the row across the Atlantic --- she attempts to defeat these demons. She isn't always successful, in fact, her first attempt to row across the Atlantic ends in failure, and this defeat almost ends her battle. But that defeat ultimately leads Tori to understand that her demons are what, in fact, make her human. The human battle described within these pages is the facet of the book that I found so compelling. Tori's adventure appeals broadly--not just to super-athletes--but to all of us who have taken up, abandoned, revived, achieved and learned from our personal journeys. Read this book for an inspiring story about one woman's quest to understand herself. You'll recognize yourself in Tori's human voice and take heart. She takes us on her adventure to be the first woman to successfully row across the Atlantic, and ultimately, on her quest for happiness.

This book has it all!

Published by Thriftbooks.com User , 13 years ago
In the introduction, the author asks her uncle, "If I write a book about my explorations, should I write it as a comedy, a history, a tragedy, or a romance?" With this book, Tori Murden McLure succeeds wonderfully on all four counts -- and so much more. This book is indeed an inspiration for anybody who has ever had (or ever will have) difficult goals or obstacles in their lives. And she does it all with never a boring word. Now that I've finished reading this book, I know it's one that I'll read more than once.

Published by Thriftbooks.com User , 13 years ago
"You don't want to go through life as the woman who almost rowed across the Atlantic." So Muhammad Ali advises Tori Murden when she is vacillating between attempting another try at rowing across the Atlantic after a soul and body-battering first attempt and failure. Fortunately for us, Tori was not willing to concede defeat in her attempt. This book is a remarkable tale of adventure and self-testing, of pride and humility, of failure and winning. She proves that it is not how many times you get knocked down, but how many times you get up again that count. We all know this but few of us have the courage to act upon it. Tori Murden is a special person. Her story relates many of the obstacles she had to overcome to reach the heights she has attained. It didn't seem as if she was bragging but was just being very factual about her life's journey. From a young age, she has acted as guardian of her older but mentally handicapped brother Lamar, she fought the neighborhood bullies, sometimes unsuccessfully, she overcame tremendous obstacles of being a highly intelligent but misplaced youth; she had guardian angels and helping hands along the way to be sure, but 95% of her victories were self-attained. She also has had a long history of giving back to her community wherever that might be, even to putting herself in danger and going where lesser souls might not, would not travel. Not only has Tori rowed twice across the Atlantic (her first attempt was aborted only a few hundred miles from her goal), but she quickly glosses over the fact that she has trekked to the North Pole and was one of the first women to reach the South Pole on the overland route. Climb mountains, cross jungles, traverse the worst of inner-city neighborhoods. What an inspiration! The adventures of Tori's first trip across the Atlantic, enduring the worst hurricane season in decades, will make your adrenaline pump. You will be holding your breath along with her. You will feel her every ache and pain as she is battered inside her small rowboat in fifty foot seas with lightning crashing and storms raging outside for days. You will admire her perseverance as she rows against the wind for fifteen hours only to lose half the distance at night when she sleeps, and then she gets up the next day to do it all over again. You will appreciate her keen intelligence as she draws upon the insights of her heroes, long dead presidents and poets, among others. When she asked a favorite uncle if she should write a book about tragedy, history, comedy or romance, her uncle replied, "A romance...the greatest stories in life are about romance." In the end, Tori finds romance and her heart. She finds humility and humanity. I highly recommend this book to anyone who is looking for a good adventure, who needs inspiration in your own journey, who is doing some soul searching, or who is looking for...romance.
Trustpilot
Copyright © 2022 Thriftbooks.com Terms of Use | Privacy Policy | Do Not Sell My Personal Information | Accessibility Statement
ThriftBooks® and the ThriftBooks® logo are registered trademarks of Thrift Books Global, LLC