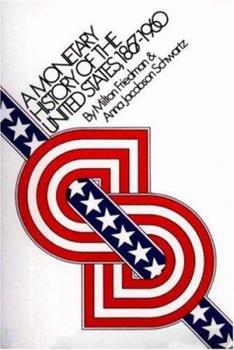 Writing in the June 1965 issue of the Economic Journal , Harry G. Johnson begins with a sentence seemingly calibrated to the scale of the book he set himself to review: "The long-awaited monetary history of the United States by Friedman and Schwartz is in every sense of the term a monumental scholarly achievement--monumental in its sheer bulk, monumental in the definitiveness of its treatment of innumerable issues, large and small . . . monumental,...

Published by Thriftbooks.com User , 12 years ago
Myths, misconceptions, and wishful thinking pervade the study of US history. Economic history has been especially prone to revisionists who twist and distort facts, or who fabricate lies outright. This is perhaps most evident in the Great Depression, as many blame the "do nothing" policies of Herbert Hoover and champion FDR's New Deal. These individuals would be truly enlightened by Friedman's Monetary History, which sheds light on the true nature of the Great Depression. Friedman convincingly argues that both Hoover and Roosevelt prolonged the Depression with inflationary policies. A useful text for anyone interested in reason, truth, and economics.

One of the Top-10 Economics Books

Published by Thriftbooks.com User , 15 years ago
MV=PQ (and other variations) Monetary History of the United States is one of the greatest and most historic economics book written. Milton Friedman won the Nobel Prize in economics for this masterwork. It revolutionized economics. The only other book that is better is The Wealth of Nations by Adam Smith. I highly recommend both books. At the time Monetary History was published, monetary economics had fallen out of favor because of the Great Depression. Economists had thought that monetary forces were ineffective as stimulating the economy in a severe downturn. The phrase "pushing up on a string" became famous. That led to the belief that government intervention of fiscal policy was always needed to keep the economy stable. Friedman and Schwartz proved beyond a doubt that monetary forces contributed greatly to the Great Depression, contributed to the strong recovery under Franklin Roosevelt from 1933-1937, and caused the recession of 1937-38. Monetary forces matter. Monetary History has never been effectively refuted, although Peter Temin did show that monetary forces were not the only cause of the Great Depression in his book Did Monetary Forces Cause the Great Depression? The weakly regulated financial system collapsing so easily was partly to blame, as was the gold standard. The New Deal made the financial system stronger so it would not collapse again, and FDR removed America from the gold standard. I highly recommend Monetary History. I also highly recommend Essays on the Great Depression by Ben Bernanke, the Chairman of the Federal Reserve. The Great Depression is the ultimate riddle and they understand it.

Classic in the canon of economic theory

Published by Thriftbooks.com User , 16 years ago
Milton Friedman and Anna J. Schwartz' A Monetary History of the United States, 1867-1960 is an analysis and explanation of the Great Depression of the 1930s. Its conclusion, first published in the early 1960s, differs from the two main explanations that existed at the time. Austrian Business Cycle Theory had argued that the Great Depression was caused by excessively loose monetary policy that fed an unsustainable economic boom during the 1920s, which eventually collapsed into depression. Friedman and Schwartz argued that instead it was excessively tight monetary policy following the boom of the 1920s that turned a run-of-the-mill recession into a depression. (For the Austrian explanation of the Great Depression, see Sir Lionel Robbins' The Great Depression or Murray Rothbard's America's Great Depression.) Keynesianism argued that the Great Depression had been caused by insufficient consumer product demand and lack of investor confidence, and that government should compensate for this by increasing its spending and financing it with government debt. Friedman and Schwartz argued instead that the problem and solution were not so much a matter of fiscal policy as they were a matter of monetary policy. Government, particularly the monetary authorities, was the cause of the depression, not the solution. Stimulative fiscal policy as prescribed by Keynes would in the long run not lead to an increase in economic growth and employment, but only to an increase in inflation. (For the Keynesian explanation of the Great Depression, see John M. Keynes's The General Theory of Employment, Interest and Money or John Kenneth Galbraith's The Great Crash, 1929.) At the time of its publication, A Monetary History was not immediately accepted by the economics profession, which then was still dominated by Keynesian thinking. But when Keynesian theory could not explain the stagflation (recession combined with high inflation) of the 1970s, monetarism came to rule the day, and Friedman would go on to win the 1976 Nobel Prize in Economics. Friedman and Schwartz's analysis has by now become the standard explanation for the Great Depression. In the very least, the book helped reestablish the importance of monetary over fiscal policy in the stabilization of the business cycle. Money matters, even if it is not the only thing that matters. In addition, the importance of the book was methodological, in that it emphasized the importance of the empirical testing of one's economic propositions. What makes the book so persuasive is the great lengths to which the authors go to sort out the causation behind the correlation-the causation, they found, ran from money to output and prices rather than vice versa or via a fourth variable. A Monetary History is a classic work in the canon of economic literature. It is on occasion still reviewed in the literature (e.g. Journal of Monetary Economics, August 1994; Cato Journal, Winter 2004). It clearly is an academic work writ

Negative Review Missed the Very Point of the Book

Published by Thriftbooks.com User , 18 years ago
I read the reviews and found them helpful, but the unnamed reviewer that attributed the Great Depression to causes totally other than this book cites, and bashed Friedman as "not having a leg to stand on" concerned me because it seems the reviewer missed the very point of the book. Nobel prize winning economist Milton Friedman and his co-author undertook the monumental work of tracing money supply for each year for nearly a century. In doing so, they did the staggering amount of work required to show all of us something very powerful. To say they don't have a leg to stand on is disconcerting because it seems to indicate a review without a reading, or at least understanding. Obviously the Great Depression was the result of of complex interactions within the economy. What Friedman tries to do is show us the EMPIRICAL evidence for interaction between a contracting money supply and a worsening economic situation, and a steady money supply and a bettering economic situation. The Great Depression may have come about because of arrogant decisions and cascading failures, and those who decided to contract the money supply evidently were a very important trigger. I can say "evidently" because Friedman's research gives us the chance to observe the evidence for ourselves. To have advanced our knowledge of economics in a practical way, to have given useful facts for fending off depressions, is a gift. That's why this book will remain a watershed work in the history of economics.

The Definative work in Economics

Published by Thriftbooks.com User , 21 years ago
This monumental work swept away all the now archaic notions about especially the great depression. The old rationalisms that the causes of the depression were 1) the Smoot Hawley terrif 2)over speculation in the stock market or 3)that lower interrest rates are the same as increased liquidity have been swept in to the dust bin of history repeated now only by the technically challenged.
Copyright © 2020 Thriftbooks.com Terms of Use | Privacy Policy | Do Not Sell My Personal Information | Accessibility Statement
ThriftBooks® and the ThriftBooks® logo are registered trademarks of Thrift Books Global, LLC