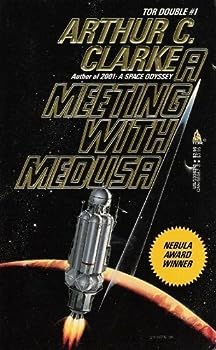 (Book #1 in the Tor Doubles Series)

This description may be from another edition of this product. After the success of 2001: A Space Odyssey, Clarke became perhaps the best known living Sci-Fi writer in the world. Using his inherent sense of humor and personal flair for adventure, Clarke combines...

Published by Thriftbooks.com User , 13 years ago
At the beginning of Green Mars, a plucky group of adventurers gathers to climb Olympus Mons, the highest mountain on Mars (indeed, the book says, in the entire solar system). Eileen Monday is the spirited and competent expedition leader, but we see most of the journey through the eyes of Roger Claybourne, who is recently retired from his post as Minister of the Interior of the government of Mars. Will it be a daring climb, full of danger and despair? You betcha. The book is thoroughly proficient in technical detail and captivating in the story of the climb, but what really drew me in was the larger story of the human experience. In the book, humans have extended their lifetimes to hundreds of years. With this extension, however, the maximum useful limit of human memory has been surpassed. In other words, though they can live very long times, most people can only remember specific experiences for a hundred or so years. People, places, and events of experience in the more distant past are simply forgotten. The limit varies from person to person, of course, and some people are blessed-or cursed-with being able to remember longer, sometimes far longer, than others. Roger is one of those people, and because of it he spends most of the book in a quiet gloom. And that is precisely what drew me in. Roger, we are told, spent his career as an advocate of conserving Mars, of preserving its wild state. His opponents were in favor of terraforming it to fit the use of humans, and they slowly and steadily got their way. Now, the people around him can't remember Mars the way it used to be. They don't recognize what they've lost, but even more significantly, to them, Mars has always been green. They don't remember the arguments waged to preserve or develop Mars-arguments they themselves had with Roger, who can remember it all too clearly. Now, everyone is happy to find themselves on a green planet so full of potential, and only Roger remembers the pristine beauty that was lost. Even worse, Eileen doesn't remember that she and Roger were graduate students together, and that they were more than friends-they were lovers. Yes, the technical details of the climb and the harrowing storms and all were exciting, but what really held my attention was Roger's struggle to find peace with himself, how his ability to remember the past made him alone in a sea of humanity. Kim Stanley Robinson is a successful science fiction writer, and he certainly doesn't need my endorsement, but I will give it nonetheless. Green Mars is a thoroughly absorbing book, with both the technical and human details imagined and presented in beautiful prose. Now that I've discovered Green Mars, I intend to explore the rest of Mars through the works of Kim Stanley Robinson. You should join me there.
Copyright © 2020 Thriftbooks.com Terms of Use | Privacy Policy | Do Not Sell My Personal Information | Accessibility Statement
ThriftBooks® and the ThriftBooks® logo are registered trademarks of Thrift Books Global, LLC