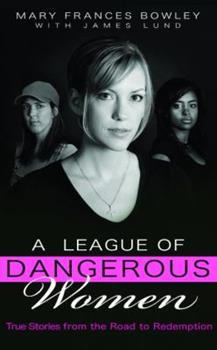 A League of Dangerous Women: True Stories from the Road to Redemption

They are all around you-in your neighborhood, your church, even your own family. They are sisters and daughters and mothers. These young women may look like they have it together, but inside they're hurting and hopeless. They are trapped by prostitution, alcohol, drugs, and darkness. They are desperate. And God is ready to transform them...into dangerous. In A League of Dangerous Women , Mary Frances Bowley tells the incredible true stories of women...

If you live in a nice Christian cocoon, here is your wake up call

Published by Thriftbooks.com User , 14 years ago
Women's Ministry leader and founder of a recovery program for women, Wellspring Living, author Mary Frances Bowley knows well each person described in A League of Dangerous Women. With compassion rather than condemnation, following the precepts laid down in Scripture, letting her Lord relate to each distressed women He brings her, Bowley has rich experience and deep truths to share. Be prepared to be dynamited out of your rut. Our God is a God of miracles, and this is a book of miracles happening right now in the lives of desperate, terribly abused, totally lost women. Not only does the Lord save, He washes white as snow and sends the washed ones out to witness for Him. Meet Danielle, physically, verbally, and sexually abused in childhood, as she makes a desperate bid to rise out of the mire of drug addiction and prostitution. How did she find Jesus? One desperate day, after hearing about the Lord, she opened the front door and asked Jesus to come in and be her best friend and walk with her forever. And the miracles began to happen. Meet Tracy who went to Church yet was betrayed by the parents who took her there. The forces of darkness reached out to claim her and drive her into deathly desperation. She tried suicide, alcohol, drugs, sex, and an abortion. When nothing else helped, she called unto the Lord, and from then on, no matter how dark the way became, God continually reached out until Tracy stumbled into His arms and her miracles. Including Danielle and Tracy, there are 14 such biographies in A League of Dangerous Women. This volume closes with a special prayer, one useable by all people, written by Tracy This is a must-read book. If you are desperate or know one chained by desperation, here are answers. If you live in a nice Christian cocoon, here is your wake up call. If the Lord is calling you to ministry, Bowley's memoirs and insights will help you. If you are not a Christian, read and see just how God can work. - Donna Eggett, Christian Book Previews.com

Important for women of all ages

Published by Thriftbooks.com User , 15 years ago
People with nothing to lose are dangerous, but not to the extent that those who have everything to give are. Mary Bowley demonstrates that the most dangerous people "count it all joy" by looking at the bigger picture. They do this with an unshakable faith that all will be well, no matter what circumstances look like at this moment. Such people have come through the fires of hell in one piece and have survived--No, they have prospered. Now they spread the good word of hope, and this is the lesson of A League of Dangerous Women: If we know it, then we can achieve it, and then we will facilitate it for others. Groups of women have been dangerous in the past, among them America's suffragettes of the19th and 20th centuries. Some men and women alike that opposed their right to vote abused them. Just as disturbingly today, some women are abused in more ways, starting as early as infancy when they are molested, raped, belittled, beaten, burned, neglected, starved, and thrown out. Further, because of peer pressure and spousal abandonment, many American women fall victim to drug addiction, alcoholism, unwed pregnancy, cult lifestyles, homelessness, poverty, prostitution, and suicide. With nothing left to lose, these women come to Wellspring and its way station home, where the staff and residents show that God is still in the healing business. Wellspring Living's motto is: "Changing Our World by Changing Hers." The staff members are in recovery as well, or at least have a calling to help, but they all receive more than they invest. Friends, family, church, and the legal system refer young broken women. Any of their stories, recorded as chapters, could stand alone as an important film. Together, they make a formidable team that cannot stop what God has started, but only help to finish it: growth, independence, and blessings. These women progressed from broken vessels, to women dangerous to themselves and others, to heroes boldly dangerous for God and His promises for healing, deliverance, and truth through salvation in Jesus Christ of Nazareth. They won't settle for less, and it's all real. This book is for any woman--middle school girls to senior citizen. I hope that women everywhere can become so dangerous. Armchair Interviews says: Those wonderful "dangerous" women get a lot done.
Trustpilot
Copyright © 2022 Thriftbooks.com Terms of Use | Privacy Policy | Do Not Sell My Personal Information | Accessibility Statement
ThriftBooks® and the ThriftBooks® logo are registered trademarks of Thrift Books Global, LLC