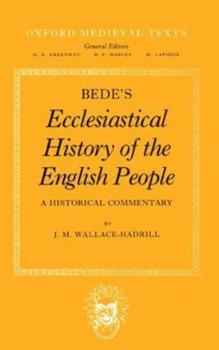 Bede's Ecclesiastical History of the English People: A Historical Commentary

Bede's Ecclesiastical History of the English People is recognized as a masterpiece among the historical literature of medieval England and Europe. Completed in 731, it comprises in a single flowing narrative a coherent history of the conversion of the English peoples to Christianity, and thestory of the island kingdoms and churches from the 590s to the early eighth century, prefaced by a sketch of the earlier history of Britain.In 1969 the Clarendon...

Treasure of the English People

Published by Thriftbooks.com User , 18 years ago
There is a definite thrill to reading the actual words set down by the infamously unassuming monk himself. This is why there are so many fields where "Bede" is mandatory foundational literature, but if you are a student of English history, literature, theology, philosophy, or sociology you already know that. One of the most lasting of the many images the book creates is the biography of Bede himself; surviving a plague that left only the abbot and the young boy Bede to sing the Divine Offices, then settling in at Jarrow where he was sheltered with the precious books for the remainder of his life.Dated as 731, Bede's history was written in his old age (when he was 60 or so) and his gentle manner of reflection on the relationship of kings, gentry, the Church, it's priests and leaders, and common folk with one another informs one quite clearly of the many years spent teaching other monks, repeatedly re-reading texts, and living the religious life that bestowed the title "Venerable Bede" upon him. A professional academic in every modern sense of the word, knowledgeable, inquiring, conscious of his place in history, inventor of the chronological annotation (A.D.), meticulous researcher of events, places, and times; from any perspective you choose, this book demands to be part of your life experience.This edition (which is probably the best-known - it's Sherley-Price's 1955 translation) includes both Bede's Letter to Egbert and the great eyewitness account of Bede's death by Cuthbert, upon which a significant part of Bede's reputation rests. There is no way to read Cuthbert's letter without understanding the ideal of humility for a medieval monk.....the image of him giving away his earthly treasures of pepper, handkerchiefs and incense in the hours before he dies....it's an image that stays with you forever.All in all, the work is one of the treasures of our species....

A classic source of English history

Published by Thriftbooks.com User , 19 years ago
This book is a "must read" for anyone studying English history. It was completed by the monk Bede in 731 AD and contains a wealth of material he gathered from sources available at that time. He provided an overview of Roman emperors, and gives accounts of conflicts within the Roman empire and particularly within Briton. He provided a good account of Saxons and other invaders and their conflicts with the Romano-Britons. He also provided various sidelights including accounts of miracle cures using holy relics. Unfortuneately, the material is often all too brief, and the original sources seem to have vanished in the dust. For example, the uprising (led by the warrior queen Boadicea) against the Romans in 61 A.D. is described by Bede in a single sentence in the Greater Chronicle (4021) when, writing of Nero, he states "this emperor attempted nothing of a military kind, and even nearly lost Britain, where two of the finest towns were captured and sacked" (he is somewhat in error as three towns were burned to the ground, and the entire Roman Ninth Legion was massacred). Chapters are very short, e.g., less than a page. I originally became interested while looking for material on King Arthur. Bede noted in Chapter 11 that after Gratian died, in 407, in his place "Constantine, a worthless soldier of the lowest rank, was elected in Britain solely on account of the promise of his name and with no other virtue to recommend him." This Constantine challenged the Romans in Gaul and was defeated and killed by the Roman officer Constantius. It is probable that this Constantine is the one alleged to be the grandfather of Arthur, but no solid connection is found (the name Constantine seems to have been fairly common). In Chapter 16, Bede again refers to the Britons after invaders (Saxons, etc.) had ravaged the land. Bede notes, in reference to the Britons, "Their leader at that time was a certain Ambrosius Aurelianus, a discreet man, who was, as it happened, the sole member of the Roman race who had survived this storm in which his parents, who bore a royal and famous name, had perished. Under his leadership the Britons regained their strength..." Bede then briefly mentions Mount Badon and goes on to discuss other things (this account appears to have been taken from the monk Gildas, "On the Ruin of Britain," written circa 520/540 A.D. - the decisive battle at Mount Badon was circa 516 A.D.). In the Greater Chronicle (4444), Bede again briefly mentions Ambrosius Aurelianus and "his parents, who had worn the purple..."The book is sometimes a little hard to follow chronologically because sometimes he gives an actual year AD, and sometimes he gives a particular year in some emperor's reign, e.g., the ninth year in the reign of Emperor so-and-so. It is somewhat heavy on religious detail, e.g., providing the complete statements by Pope Gregory on allowable marriages between related men and women and on relations between husbands and wives.

Published by Thriftbooks.com User , 20 years ago
The Venerable Bede, priest and monk at Jarrow, (and revered as a saint by both Catholics and Anglicans) has written one of the earliest, most important church histories of all time. Within these pages, several centuries of very early English Christianity is brought to life in a manner that is timeless. A must for the shelf of any serious historian, (whether sacred or secular) and certainly for any theologian.Heavenly Father, who didst call thy servant Bede, while still a child, to devote his life to thy service in the disciplines of religion and scholarship: Grant that as he labored in the Spirit to bring the riches of thy truth to his generation, so we, in our various vocations, may strive to make thee known in all the world; through Jesus Christ our Lord, who liveth and reigneth with thee and the Holy Spirit, one God, for ever and ever. --- the Collect for St. Bede the Venerable, priest, monk, and Doctor of the Church

Published by Thriftbooks.com User , 21 years ago
Don't let the title scare you. (Well, on second thought, if you found this book description then you're probably an academic anyway, and not likely scared by big words). In any event, Bede has a remarkable gift for making his incredible and, occasionally, dry account remarkably vibrant. I'm sure Bede was one hell of a monk, but his writing is difficult to surpass.
Copyright © 2020 Thriftbooks.com Terms of Use | Privacy Policy | Do Not Sell My Personal Information | Accessibility Statement
ThriftBooks® and the ThriftBooks® logo are registered trademarks of Thrift Books Global, LLC