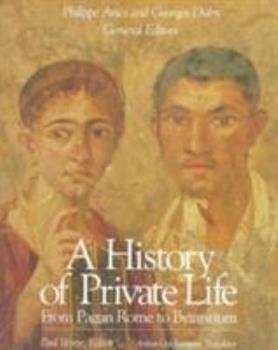 A History of Private Life, Volume I: From Pagan Rome to Byzantium

(Book #1 in the A History of Private Life Series)

First of the widely celebrated and sumptuously illustrated series, this book reveals in intimate detail what life was really like in the ancient world. Behind the vast panorama of the pagan Roman empire, the reader discovers the intimate daily lives of citizens and slaves--from concepts of manhood and sexuality to marriage and the family, the roles of women, chastity and contraception, techniques of childbirth, homosexuality, religion, the meaning...

A wealth of pictures and photographs

Published by Thriftbooks.com User , 13 years ago
I took a year to read this book, savoring a few pages at a time. There are many drawings, photographs, and museum artifacts that enrich this volume. While the author of the major portion about Rome subscribes to the current postmodernist "take" on everything, he did not turn his writing into academic gobbledygook. Observations about governance, wealth, religion, and the importance of funerary customs, are among the many major topics covered in the text, always with a wealth of visual examples. For those interested in the time, this is a treat to read. The portion on Byzantium is written by another author, and is much shorter than the long segment about Roman life. The emphasis in this section of the book is mostly about religious life, but many other aspects of life are covered, as well. The emphasis throughout the book is on the daily life of citizens in various classes of society, and how they coped with their circumstances. This is not a history of kings and empires, but a portrayal of living quarters, city layouts, and the changes in mores that occurred over a long span of time.

Published by Thriftbooks.com User , 15 years ago
Fascinating in parts; illustrative of things I had not known or even suspected, things I had read allusions to previously, and things I never would even have thought studied. Of course, you need an interest in Roman and Byzantine life; and even if you have such an interest, not all the details will hold your attention. Some of the cross cultural comparisons were beautifully illustrative (one that sticks was a comparison between the economy of a present day middle eastern country to that of the Empire). I am pretty sure this suffered from some sort of idiological bias, as it was weirdly contradictory in places, though it is an original/odd enough bias that it it probably unique to the authors. One of the authors at least, seemed to be an intimate of Michel Foucault. All were french, and the prose suffers for it to the point of being occasionally downright nonsensical. The book certainly rid me of any "golden age" delusions I might have had, regarding Roman times. I'll stick with my electric can opener, microwave ovens, annoying legal system, and Blue Cross HMO thanks very much.

An excellent view of ancient life in western Europe

Published by Thriftbooks.com User , 22 years ago
The back of the book says that the "History of Private Life" series is "written and edited by leading scholars yet intended for any reader who wonders how people lived and behaved in earlier times". In this, the first volume has definitely succeeded. It is divided into five parts: The Roman Empire, Late Antiquity, Private Life and Domestic Architecture in Roman Africa, The Early Middle Ages in the West, and Byzantium in the Tenth and Eleventh Centuries. Each of the five sections is divided into chapters, which are then each divided into portions, each portion with its own heading, for easy identification. So, for example, under "The Roman Empire" is a chapter entitled "Marriage," which is divided into sections headed "Criteria for Marriage," "The Transformation of Marriage," "Marriage as a Duty," "The Harmonious Union," etc.I thoroughly enjoyed most of the sections, although "The Roman Empire" was a bit too long-more than 200 pages, twice as much as any of the other sections. Often it sounded like the author was repeating himself.I didn't find "Private Life and Domestic Architecture in Roman Africa" very interesting, probably because the emphasis was on the Domestic Architecture part. Since the section was based mostly on architectural excavations, it had little information on "private life." Most of the section was overviews of the plans of houses and cities in Roman Africa. Since minor details, like furniture arrangements, often do not survive to be discovered by archeological expeditions, there was little information on such minor details.The other four parts were much more interesting. The book contains a wealth of information on private life: the way people thought, the way they acted, the way they lived. It is extremely readable. I am not a scholar of the period, but I found the book very easy and enjoyable to read. This simpleness in writing means that a lot of scholarly arguments and debates are left out. The whole text is sort of streamlined. Generally this is a good thing, but sometimes it makes one suspicious of some of the author's statements. On page 224, for example, one illustration's caption reads, "Tomb of a physician, 3rd-4th century. He is not, as was once thought, reading a medical treatise but rather his classics..." Looking at the illustration, the scrolls the physician is reading are blank, with no identification on or around them. How could one decide what the man was reading? The author may have had a reason for making this statement, but without the reason given, I found myself thinking, "For heaven's sake, the man could be reading ANYthing." However, if nothing else, this forces the reader to realize how subjective interpretations of history often are. The editors of this book are to be commended for having included enough information that the reader can make their OWN subjective judgements about how to interpret the evidence.This book's biggest problem, I think, is its length

Insight into how 'real people' lived in ancient times

Published by Thriftbooks.com User , 23 years ago
Many history books focus on the major events that changed history. This book offers a fascinating look at everyday life in ancient times. The author looks at beliefs, religion, crime and punishment, the treatment of women, law, and more. It's interesting to note how many things have stayed the same, and how many things have changed. The book is written in plain english, and doesn't require an in-depth knowledge of history to understand.

The Grandeur that was Rome

Published by Thriftbooks.com User , 24 years ago
The subjects, and people, covered in this volume of the History of Private Life are probably the most remote for the modern day reader. Medieval and Renaissance life appears more colorful than Pagan Rome and Early Christian Byzantium, just like a medieval tapestry draws the eye away from a worn marble statue. But Roman life proves to be just as colorful and complex--perhaps more so than medieval life. This volume pays close attention to the everyday activities which took man, woman, child, and slave from cradle to grave. One learns that a man would be fined more for stealing a pig than for killing a slave; that women would attempt to attract men by feeding them a fish that had been held between their loins; and that the domestic sphere of ancient Rome was queerly both public _and_ private. Copiously illustrated with photographs and reproductions, some in color.
Trustpilot
Copyright © 2022 Thriftbooks.com Terms of Use | Privacy Policy | Do Not Sell or Share My Personal Information | Accessibility Statement
ThriftBooks® and the ThriftBooks® logo are registered trademarks of Thrift Books Global, LLC