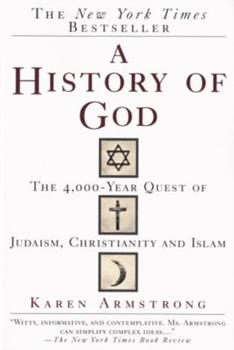 A History of God: The 4,000-Year Quest of Judaism, Christianity and Islam

Why does God exist? How have the three dominant monotheistic religions--Judaism, Christianity, and Islam--shaped and altered the conception of God? How have these religions influenced each other? In this stunningly intelligent book, Karen Armstrong, one of Britain's foremost commentators on religious affairs, traces the history of how men and women have perceived and experienced God, from the time of Abraham to the present. The epic story begins with...

A History of God is a must read for the religious, agnostic, atheist, spiritualist and all of mankin

Published by Thriftbooks.com User , 3 years ago
I welcome her opening my door once again to be immersed in yet another one of her well researched and documented works.

Published by Thriftbooks.com User , 16 years ago
It is difficult to know where to begin when reviewing this book. What appears to the eye as a slender tome of some four hundred pages turns out to be quite a long read. The reason for this is that it covers some three thousand years of religious and philosophical history and does not skimp on the details. Sufiism, Kabbalah and Gnosticism, as well as more mainline theological ideas are all well-covered along with a healthy sprinkling of Hindu, Buddhist and Zoroastrian concepts. Karen Armstrong begins with a discussion of the origins of monotheism and then proceeds to a describe its development within the three main monotheistic religions - Judaism, Christianity and Islam. While there are probably better, more detailed accounts of each (ie. Hodgson on Islam), she does a credible job of describing many of the nuances of the three. Her primary thesis, agree with it or not as you will, is that religion and its conception of God changes with time. She charts these changes and dwells upon the similarities and relationships between Islam, Christianity and Judaism with considerable insight. She devotes considerable time to the problems of theology each encountered and discusses specific issues such as original sin, the trinity, creation (ex nihilo versus emanation) and the perennial conflict between rationalism and mysticism. While many who practise the faiths in question will find much of what she says disturbing or heretical, her ideas provoke thoughtful contemplation. She is generally even-handed in her analysis and has a sympathetic tone for almost all of the ideas on which she touches. She is perhaps harshest with Christianity - not surprisingly - since according to the introduction, she spent her early life in the Catholic tradition. Her softest spot seems to be for mystical spirituality and she gives short shrift to modern-day fundamentalism. I find curious her idea that atheism is one in a long line of mystical approaches to the spiritual. If I have one concern with this book it is that it is too much Karen Armstrong and not enough of anyone else. She holds strong views on nearly everything and is unafraid to state them as if they were objective truths. Dissenting voices are often entirely ignored, leaving the reader unfamiliar with this material feeling that opinions are facts. While the author's analysis is sharp, fresh and eye-opening, it is not necessarily the last word on the subject. Still, as one who comes from the Christian faith, I would recommend this book to those who don't mind having their pre-conceived notions challenged.

This is the Education I Should Have Received in Seminary!

Published by Thriftbooks.com User , 17 years ago
Karen Armstrong teaches the development of monotheistic faith in a way I wish my seminary professors would have done. This book is extremely well documented. Every assertion is backed by historical documents or historical evidence. The glossary alone opens up a world of terms and concepts that leaves me in a meditative awe. The Suggestions for Further Reading is definitely my shopping list for future study. In constrast, my seminary education was long on political correctness and short on factual evidence. Armstrong deals with feminist issues honestly and with sensitivity. Impressively, she does not relinquish factual evidence for political correctness, which almost all liberal education does today. She gives us an accurate history, and at the same time, frequently reminds us these are only feeble human ideas, and not the "Ineffable God." Also, she tells the story of modern atheism in a way that makes me nod my head in agreement without giving up my own perception of God. Wow! Armstong does seem to fudge on the person of Mohammed. She tells how he organized men for war and brutally defeated his enemies, then almost as a direct contradiction of the evidence, she proclaims him a man of peace. Putting that aside, I've been very enlightened by her account of the Islamic faith. So many things I hadn't known! You can't miss the point of the book. God is "ineffable," beyond all human catagories, concepts, experiences, and even beyond existence itself. That blows my mind. She makes her point beautifully without leaving me feeling too threatened. Again, seminary professors should take a lesson. I've told all my friends about the book, and I'm sure by now they're all sick of me and Karen Armstrong. Sorry. The book is simply excellent.

And what a history it is...

Published by Thriftbooks.com User , 21 years ago
"Human beings cannot endure emptiness and desolation; they will fill the vacuum by creating a new focus of meaning. . . .we should, perhaps, ponder the history of God for some lessons and warnings." --- last paragraph of Armstrong's book.The jacket points out that Armstrong teaches at the Leo Baeck College for the Study of Judaism and the Training of Rabbis and Teachers (as well as having spent seven years as a nun). Her academic knowledge more than shows--which is why I don't understand the reviews that claimed she was terribly biased. The book seemed to take a step back and objectively review the HISTORY of God, rather than pass judgement on one religion or another. Armstrong demonstrates that through time, humanity has always sought to fill the void of unknowing by seeking a higher power. Thus, God will always exist, even in our increasingly godless society. She follows Man's God through history--from the dawn of time until now, and examines the reasons for the different concepts of God between the Monotheists (and even modern atheists and skeptics).The book is complete. It's a tough read though--with a scholarly tone and complex sentence structures. It's not a beach book or even an airplane read. But it's worth your time and money if you're interested in the histories of both our most enduring concept/being (God) and of the interplay between religion and man.

If this won't shake your thinking, nothing will!

Published by Thriftbooks.com User , 22 years ago
A History of God was one of the most important books I've read. Karen Armstrong fearlessly, yet respectfully, traces the history of monotheistic thought from its earliest conception to the present day, all in a readable, lay-language book. It doesn't get much better, in my opinion. However, be cautioned. If you are inclined to cling to old dogma, or frightened by the possibility that God might not be exactly what you were taught in Sunday School, then don't bother picking up this book. It will haunt you. On the other hand, if you are seeking a more clear picture of who God might really be, if you are open to the possibility that our concept of Him has evolved enormously since the days of Abraham, then this might be an excellent read for you.Besides a good history lesson, it is insightful for the Western reader to gain an understanding of the "non-Christian" monotheistic traditions, i.e. Judaism and Islam. Armstrong does a wonderful (and contrary to some critics, I believe a FAIR) job of explaining how both Christianity and later Islam branched off of the Judaic traditions. Above all, it places the evolution of the God-concept into its cultural context, without which, our current God-concept is little more than a wholesale belief in so much mythology. Be prepared to think, to change your mind, and to emerge from the end of this book a changed person.
Trustpilot
Copyright © 2022 Thriftbooks.com Terms of Use | Privacy Policy | Do Not Sell or Share My Personal Information | Accessibility Statement
ThriftBooks® and the ThriftBooks® logo are registered trademarks of Thrift Books Global, LLC