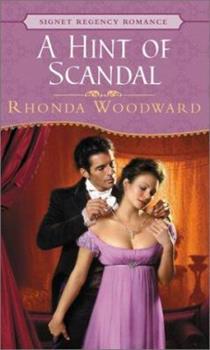 Published by Thriftbooks.com User , 15 years ago
The Duke is on his way to see about his only Heir (His brother's son) because his sister in law as written a desperate letter indicating the poor lad is on his death bed. The duke is injured in an attempted murder and is left for dead. He stumbles upon a house but collapses before he is able to tell anyone who he is. Bella's little brother alerts his sister and together they bring the stranger in and Bella nurses him back to Health till they can find out his true identity. Unfortunately for Bella, in a matchmaking plot gone wrong by her cousin, she finds herself suddenly alone overnight with the Duke and is forced to marry him to save her reputation. If this was the only plot to the novel, because it was well developed it would have been quite enough for me, but Ms Woodward delighted us in adding a twist to her tale. This is another recommendation due a 10 star rating. Lovely Lovely read.

A hint of surprise

Published by Thriftbooks.com User , 16 years ago
I was surprised at how much I enjoyed this book after reading some of the reviews for this book. I previously read Ms. Woodward's book "Moonlight and Mischief" and found it to be one of the best regencies I have read all year. So I purchased her other books and am working my way through them. Ms. Woodward has a unique and absorbing way of writing. I also love her historical accuracy. Her characters are believeable and engaging and I can't wait to get into her next book.

I Really Liked It!

Published by Thriftbooks.com User , 18 years ago
Where have you been, Rhonda Woodward? For those of us who appreciate strong character development, engaging and realistic dialogue and a touch of humor in the Regency genre, ... In her second book, A Hint of Scandal, she gives us interesting, believable and complex characters woven into a story line that provides mystery, inner conflict and of course, romance. The opportunity to feel the outwardly reserved Arabella Tichley's emotions as she struggles with the prospect of nursing a mysterious stranger with a gunshot wound back to health kept me unable to put the book down. I could feel her inner conflict as the stranger forced her to evaluate what had been her perfect plan to create an uneventful small village life following a marriage to the local dandy. Arabella's horror and desperate attempt to think of a way to extract herself from an extremely compromising situation was realistic and presented in a manner that I could relate to. The story's hero, the Duke of Westlake, is a man of integrity, strength and resolve to both find and deal with his attempted assassins and find a way to capture the heart of the lovely Arabella. The antics of Arabella's cousin, Lady Beatrice, who has the ability to create chaos at every turn, are what cause a variety of twists and turns in the story line. Beatrice makes the reader wonder what she could possibly do next to complicate Arabella's life, and I found myself both embracing Beatrice as a lovable character and becoming annoyed with her short-sighted perspective in the ways she attempted to help her cousin, Arabella. Rhonda Woodward is a much appreciated new voice whose strength lies in her ability to present characters who keep you coming back for more. I thoroughly enjoyed A Hint of Scandal.

Published by Thriftbooks.com User , 18 years ago
I thoroughly enjoyed spending an afternoon with these delightful characters. I really love Regencies and this satisfied my craving for a good one. Though there are lots of forced marriage plots, Rhonda Woodward adds an interesting and warm approach. The story held my complete interest until the very end. Because I loved her first book so much, and this book is a great follow-up, I hope there are more books from this author in the works. A charming read.

Published by Thriftbooks.com User , 18 years ago
Set around the year of 1818. Alexander Arthur Henry George, Duke of Westlake, received a summons from his widowed sister-in-law. Her ten year old son had an accident and was near death. Worried for his nephew, Alex set off immediately. Only his groom, a lad named Johnny, accompanied him. En route they were attacked by highwaymen. Arabella "Bella" Tichley was awakened by her younger brother, Tommy, and told of the half dead man outside. Bella nursed Alex to health while keeping as many nosy neighbors away. As he recovered, Alex spent some wonderful time with Bella and her family. By accident, Bella was compromised and they were forced to wed. Bella felt ill at ease on Alex's huge estate and very lonely since he was off on business. She decided to join her cousin, Lady Beatrice, who had recently gone to London for her first Season. From the moment she arrived, Bella was followed by a hint of scandal and a bit of danger. More was going on than she knew. All through the story the reader knows what the danger was and it was not hard to figure out who was behind it all. Yet author Rhonda Woodward kept me interested by the unusual circumstances surrounding the romance of Alex and Bella. Terrific light reading!
Copyright © 2022 Thriftbooks.com Terms of Use | Privacy Policy | Do Not Sell My Personal Information | Accessibility Statement
ThriftBooks® and the ThriftBooks® logo are registered trademarks of Thrift Books Global, LLC