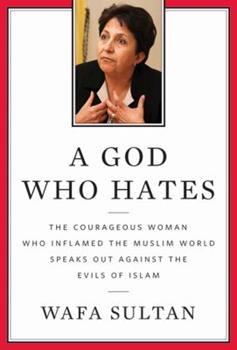 A God Who Hates: The Courageous Woman Who Inflamed the Muslim World Speaks Out Against the Evils of Islam

From the front page of "The New York Times "to YouTube, Dr. Wafa Sultan has become a force radical Islam has to reckon with. For the first time, she tells her story and what she learned, first-hand, about radical Islam in "A God Who Hates," a passionate memoir by an outspoken Arabic woman that is also a cautionary tale for the West. She grew up in Syria in a culture ruled by a god who hates women. "How can such a culture be anything but barbarous?,"...

A God who Hates

Published by Thriftbooks.com User , 13 years ago
From a literary standpoint, this book does have a few flaws, however its message is so important that I could not give it anything buy 5 stars. The Arab proverbs and jokes that she includes to illustrate the Muslim Arab mind-set are more than worth the price of the book by themselves. One fault she has is that she tends to repeat herself rather often. Another minor point is that though she believes she has liberated herself from the Islamic culture she was brought up in, it still influences her thinking in places. For example, throughout the book she makes the claim that it was the pre-Islamic Arid desert Bedu culture of Arabia that produced and caused the evils of Islam. That is an unfair (and untrue) statement and is a direct result of Islamic propaganda which denigrates pre-Islamic Arabia calling it the Jahiliyyah (or age of ignorance). Nothing could be further from the truth. The traditional Bedu raiding culture, though it did exist, was not as vile as she made it out to be. In their raids against each other there was very little taking of life out of fear of tha'ir, or blood revenge. It was only when Islam turned these raids outward against "others" that the raiding culture took on a more deadly form. Furthermore, pre-Islamic Arabia was not all Bedu culture. There were many cities, empires, and high civilizations in pre-Islamic Arabia that rivaled those in the so-called fertile crescent. Jews, Gnostic Christians, Orthodox and Catholic Christains, and pagan Arabs of all sorts all co-existed in pre-Islamic Arabia, and there was a great deal of intellectual ferment. The status of women was much higher than in surrounding areas (such as Greece and Rome for example), as women could become rulers of states (history counts at least 42 that we know of), Goddesses, or owners of companies (Muhammad's first wife for example). In fact the chivalry code of Europe's Middle Ages was heavily influenced by pre-Islamic Arabic poetry brought to Spain by the Arabs. Unfortunately all of this came to an end with the advent of Islam. In other words, it wasn't Arabia's so-called "intellectual desert" that created Islam, it was Islam that turned Arabia into an "intellectual desert." Islam has trashed every country it has taken over, and none more so that Arabia. In a bit of a self-contradiction, Ms. Sultan even admits as much on page 205 where she says "Islam subjugated the cultures of all the peoples it afflicted, but it eradicated all traces of indigenous Arab culture more thoroughly than those of any other." All-in-all, though, this book is a must read for anybody interested in the Middle East, Islam, Terrorism, the fate of the west and/or women's rights.

Published by Thriftbooks.com User , 13 years ago
Excellent book, must read, brave woman, speaks the truth, exposes the violence, hate and evil of a religion that promotes terror and killing of kafirs, infidels. Dr. Wafa sultan is a great, smart, brave ,educated, and talented lady. her book is worthy of 5 stars.I recommend all to read it.

Wish Muslims would read this book without denial and defensiveness

Published by Thriftbooks.com User , 13 years ago
Under Islamic Sharia Laws and the teachings of Muhammad and Quran, atrocities has been committed against many over the centuries . Since 9/11 these acts, specially towards women, honor killings, rapes, stoning, murders and slavery have been noticed more. Between 1979, the beginning of the Iranian Revolution and formation of the Islamic Republic Of Iran till 1997, some 1500 Iranian women have been hanged, some as young as 10 years old. Thanks to the writings of brave women like Wafa Sultan, Brigitte Gabriel, Nonie Darwish and Ayaan Hirsi Ali, who have put their lives on the line by pouring their gut wrenching stories out in the open, about their personal lives under Islam, the western world seems to be waking up, howbeit still not fully. Then we read the reviews of Sultan's book by 2 folks on this space by the name of, you guessed it, Muhammad, who much in vain and with total hypocrisy call her unqualified for telling the truth about Islam's treatment of women. They attempt to discredit Dr. Sultan simply because she hasn't been educated in " theology of Islam ". What a farce. What a theology ! How can these people live with themselves for denying what is so obvious to the entire world except to those who follow such a dark and hateful religion. " A God Who Hates " must be read by all curious minds, as well as a book which will show the reader as why Islam is the way it is, by showing who Muhammad really was. "Understanding Muhammad, A Psychobiography" By: Ali Sina

A Must Read Book!

Published by Thriftbooks.com User , 13 years ago
I have just completed my reading of Wafa Sultan's book, "A God Who Hates". This is a must read book! Many are familiar with her brilliant debate with a Saudi Sheikh on al jazeera television in which she excoriated the coercive violence endemic to the Muslim world. Here she reviews the sources and foundations of that worldview that creates such pathologies. Many accuse her of hating. What I found in her book was a passionate love for Muslims and a desire to open their minds to escape from the oppression that is endemic to Islam...Period. This is a woman who has received hundreds of death threats for simply telling the truth as she experienced it. Having just completed my own careful reading of the Qur'an using Muslim commentaries I affirm that her picture of the message pervasive in the Qur'an is absolutely accurate. She devastates the usual arguments brought against so-called "cherry-picking" of negative things in the Qur'an. Most importantly, she shows, with the acumen of a trained doctor, the results of a consistent application of this world-view to children and adults. The results are devastating. The closer you get to orthodox Arabic Islam, the worse it gets. Having lived in Muslim countries for 11 years I found myself over and over saying, "wow, for the first time I have an explanation for the behaviors that I saw". This is a book that I am going to buy 50 copies of and give to friends, especially Muslim friends. They may become angry, but some will quietly admit, this is the problem. The problem of the Muslim world is not its lack of application of Islam. The problem of the Muslim world is Islam...period. We need to have the love, courage and compassion to give Muslims an opportunity to consider an insider's critique of their own system. Growth only comes through challenging long established assumptions. Doubt is not a "shaytan". In fact, when extreme oppression is established, it is a "word" from God and a "spirit" from God. That God is love, not hate. Thank you, Wafa, for your great courage! You have inspired me to love my Muslim friends enough to challenge their assumptions.

Published by Thriftbooks.com User , 13 years ago
Wafa Sultan is an amazing woman. She is a true hero in a full sense of this word. Because of what she writes and talks about, she is threatened with death by those she writes and talks about. And, frankly, that in itself validates everything she writes and talks about. In this age of stupidity and political correctness - this is a gem not to be missed. Find some videos of her on YouTube. You'll be blown away by this lady!!
Trustpilot
Copyright © 2022 Thriftbooks.com Terms of Use | Privacy Policy | Do Not Sell or Share My Personal Information | Accessibility Statement
ThriftBooks® and the ThriftBooks® logo are registered trademarks of Thrift Books Global, LLC