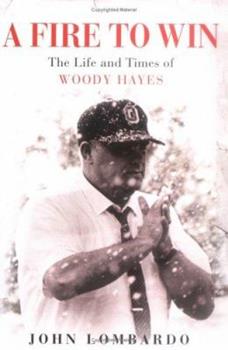 A Fire to Win: The Life and Times of Woody Hayes

Woody Hayes is one of the greatest football coaches in history--and one of the most fascinating. More than a brilliant coach, he was a complicated, contradictory man. The former history teacher would tout the ideals of democracy yet run his football empire as an absolute monarchy. But he had a surprisingly altruistic side, hidden from the public, . and Hayes visited local hospitals, donated his time, money, and advice, and insisted that his players...

Published by Thriftbooks.com User , 13 years ago
This was everything it was advertised to be, and to top it off, it was very well packaged. Very pleased with this seller.

Published by Thriftbooks.com User , 14 years ago
A FIRE TO WIN IS A NICE READ, BUT DON'T REALLY EXPECT TO KNOW WOODY THE PERSON. IN MY OPINION THIS BOOK DOES A GREAT JOB GOING THRU EACH OF THE SEASONS THAT WOODY COACHED. BUT I DON'T REALLY HAVE A GOOD IDEA WHAT WOODY WAS LIKE EXCEPT FOR BEING A SLAVE DRIVER OF A COACH, DISCIPLINARIAN, ABSENT FAMILY MAN, AND OBSESSED WITH WINNING. I PICTURE HIM AS BEING VERY SELF CENTERED, EGO TRIP, BRASH AND VERY ABRASIVE. HIS WIFE GOT HER OWN LIFE. HE IS VERY MUCH LIKE VINCE LOMBARDI IN HIS COACHING STYLE. I REALLY WANTED TO KNOW MORE ABOUT THE SOFT SIDE OF WOODY AND MORE ABOUT WHAT HE DID AFTER FOOTBALL. LIKE HIM OR HATE HIM, HE WAS A HIGHLY SUCCESSFUL COACH AND DID A LOT FOR COLLEGE FOOTBALL. I RECOMMEND THIS FOR ALL COLLEGE FOOTBALL FANS FOR A SOLID AND INTERESTING READ.

Good book but not great

Published by Thriftbooks.com User , 16 years ago
I am an Ohio State Buckeye Football fan and found the book to be interesting, but not in the top 20% of books that I've read. There are a few other books about Woody, but I have not read them. The author could have interviewed more former players and colleagues of Woody. Most interesting is how Woody originally got the Buckeye head coaching job and the discussion of his life immediately after his firing.

Published by Thriftbooks.com User , 17 years ago
The definative Hayes bio. No "idol worship" and no ax job. This the real Woody. Love him or hate him, he went 238-72 and won 5 National Titles his way. His kids got college degrees, Woody ABSOLUTELY made sure of that. Woody's discipline is what America needs today, now more than ever. I pulled an ALL NIGHTER the day I got this book, I just had to finish it.

Published by Thriftbooks.com User , 17 years ago
It's easy to remember Woody Hayes as a brutal tyrant on the football field, who was able to turn on his country charm for the media and fans away from it. A folk hero and coaching icon who was tragically brought down by personal demons in the form of a punch to an opposing player during a football game. But how does a man like Woody Hayes become the stuff of legend? I think that in order to understand a man, you have to know where he came from. A Fire To Win is more than just a recounting of the same stories we've heard over and over. The book takes us on a journey through a man's life in order that we may understand him, even if we don't agree with him. A brutal tyrant, yet mentor, academic advisor, and friend. A staunch conservative, yet defender of student's rights to rage against the machine. A man who recognized the value of power, but cared not for the money associated with it. A preacher of family values who rarely came home from work. An enigma to be sure, but when seen over the light of a lifetime, somehow, his choices make sense. The infamous punch is of course perhaps the single most defining moment in the life of Woody Hayes. One may think that this is where the story ends. A Fire To Win takes us well beyond this moment to witness the remarkable resurrection of a remarkable man. Fittingly, this is where the real story ends. A Fire To Win is a fascinating read about the life of the enigma, icon and flawed hero that was Woody Hayes.
Trustpilot
Copyright © 2022 Thriftbooks.com Terms of Use | Privacy Policy | Do Not Sell My Personal Information | Cookie Preferences | Accessibility Statement
ThriftBooks® and the ThriftBooks® logo are registered trademarks of Thrift Books Global, LLC