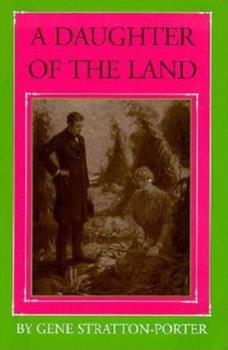 A Daughter of the Land

Kate Bates is another Gene Stratton-Porter unsung hero in the tradition of Elnora Comstock, of A Girl of the Limberlost, and Freckles and Laddie, of books of the same name. As the youngest child, and female, in a large prosperous farm family, she has been designated as her mother's helper in old age. Kate finds this unfair since all of the brothers have been given land and the older sisters sent to teacher training. With the help of a nephew and sister-in-law,...

Published by Thriftbooks.com User , 12 years ago
"A Daughter of the Land" is a book I read because my mother, down from my grandmother, passed this book on to me. I received it way back in my teenage years and I read it then. I found it harsh and depressing...the story of the 12th child, a daughter, who was expected to slave at home for her family while the other children received many comforts and wealth from their austere, but abundant farming family. Yuk. I picked it up again when I was about thirty and re-read it, thinking maybe I had misjudged it. No, it was Yuk. At a conference in 2006 the author of this book (Gene Stratton-Porter) was highly recommended for other works, which I then read... and ...LOVED. Her books now inspire my high recommendations and comments. Soo...I gave "A Daughter of the Land" another chance. It was humbling to realize that the book wasn't at fault before, it was me who hadn't yet grown up enough. Suffering was indeed still a theme, but so was hope and humbleness and loving in spite of disappointment. It was about forethought and wisdom and about the consequences of following foolishness, but it was not preachy. "Daughter" is not like her other works. It has a humanity which is more pronounced, and yet the nobility seems the richer for it.

Story of Ambition and Preserverence

Published by Thriftbooks.com User , 15 years ago
The Gene Stratton Porter books were written in the early 1900's. The three that I've read (Daughter of the Land, A Girl of the Limberlost, and Laddie) all feature poor Indiana farm families with a young daughter struggling to grow up and understand the world around her. 'A Daughter of the Land' is the saddest book of all, but it is my favorite without question. This book was passed on to me by my grandmother who related strongly to the main character, Kate. Kate, like my grandmother, persevered among a family who mistreated her and had little money or time to afford her for her future. Kate shows kindness and understanding and makes her own future for herself with her intelligence and hard work. Her love of nature brings her small happinesses. I struggle to understand how a young girl today could relate to the old-fashioned tone to the book. I would recommend this to any young woman ~age 14 if not this fact. A mature young reader will find much inspiration in the text. The resonating message is that a young woman must be strong and sometimes look to herself for survival.

Daughter of the Land

Published by Thriftbooks.com User , 21 years ago
In many ways I preferred this book to A Girl of the Limberlost. It was less gaudily emotional but interestingly, the heroine's parents are also less than satisfactory, and the story honestly portray's the heroine's own difficulty loving her daughter as much as her son. Still, I was left with no real understanding of why she discarded the wealthy suitor for the boor! But it seemed a fairly accurate portrayal of society of the time.

Published by Thriftbooks.com User , 22 years ago
I loved this book almost as much as Laddie, and place it right next to A Girl of the Limberlost. The story touched me, and every girl that reads Stratton-Porter books must read this masterpiece. Touching!!!
Copyright © 2020 Thriftbooks.com Terms of Use | Privacy Policy | Do Not Sell My Personal Information | Accessibility Statement
ThriftBooks® and the ThriftBooks® logo are registered trademarks of Thrift Books Global, LLC