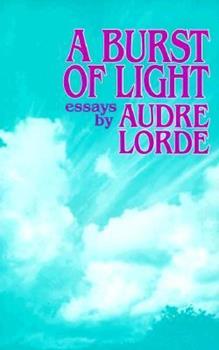 A Burst of Light

This description may be from another edition of this product. "Lorde's words -- on race, cancer, intersectionality, parenthood, injustice -- burn with relevance 25 years after her death." -- O, The Oprah Magazine Winner of the 1988 Before Columbus Foundation...

Published by Thriftbooks.com User , 14 years ago
In this beautiful collection of interviews, essays, and journal writings, Audre Lorde remains true to her radical feminist politic, one she espoused all her life. She also clearly articulates her belief in living self-consciously, as a poet, with integrity. The highlight of this collection is an interview Lorde gave shortly before her death, explaining her opposition to sadomasochism. The interview reflects Lorde's lifelong commitment to affirming the erotic, while fighting against the racism, sexism, and male dominance inherent to pornography and sadomasochistic sex. Lorde writes, to assert that the idea of power over powerlessness is erotic, is unjustifiable, because it prepares us either to accept subordination, or enforce dominance. She calls S and M sex a tired, one-sided mode of human relating that continues to allow white men to oppress women and people of Color, and the overwhelming prevelance of masochistic images of women in pornography and media today, bear out Lorde's assertion that this kind of sex is commercialized, soul-numbing and quite frankly, trite. To play along with the idea that dominance is sexy, one must buy into a white male view of sex, according to Lorde, and that discourages women and men from questioning the social, political and emotional factors that keep men in positions of power even outside the bedroom. Lorde brings up valid points here that do not deserve to be written off, for one does have to wonder if men who feel more sexually excited by the idea of using power or force "in play" against women during sex, rather than engaging in more egalitarian activities, can truly see women as equal human beings. This book is not for men who feel defensive about questioning their own inability to experience sex without focusing on power differences. This book is for men and women willing to examine their own choices and ideas, in an attempt to create the kind of future Lorde envisioned--one free of racism and sexism.

An important personal and political testament

Published by Thriftbooks.com User , 20 years ago
Audre Lorde, a prolific writer of both poetry and prose, is regarded by many (myself included) as a major figure in both African-American and lesbian literature. "A Burst of Light" is one of her important prose works. The book contains an interview, three short essays, and a lengthy collection of excerpts from the journal she kept during her battle against cancer.In the book, Lorde addresses many of the themes which she has explored in past works: racism, lesbian culture, political activism, and more. The only sour note is the interview, "Sadomasochism: Not About Condemnation," in which Lorde bitterly critiques a particular sexual subculture within the lesbian community. Lorde's patronizing tone reminded me of the attitude that anti-gay heterosexuals often adopt when talking about the lesbian community! And lines like "Liberalism allows pornography and has allowed wife beating as First Amendment rights" do not help Lorde's credibility.But if you skip the interview, you will find the rest of the book to be both politically incisive and often very moving. I particularly enjoyed the essay "Turning the Beat Around: Lesbian Parenting 1986," in which Lorde, a Black lesbian who co-parented a daughter and a son with her white woman lover, reflects on the joy and challenge of parenting.And the excerpts from her journal are a beautiful testament to Lorde's own courage in her fight against cancer. The excerpts record her travels to Berlin, Germany; Melbourne, Australia; and other places as she struggled to maintain her physical health while continuing her work as a cultural activist.In one of her journal excerpts, Lorde writes, "Survival isn't some theory operating in a vacuum. It's a matter of my everyday life and making decisions." Very true. And "A Burst of Light" is a vibrant celebration of survival.
Copyright © 2020 Thriftbooks.com Terms of Use | Privacy Policy | Do Not Sell My Personal Information | Accessibility Statement
ThriftBooks® and the ThriftBooks® logo are registered trademarks of Thrift Books Global, LLC