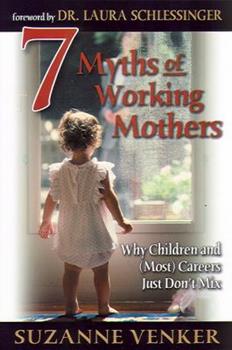 7 Myths of Working Mothers: Why Children and (Most) Careers Just Don't Mix

Dispelling our most cherished myths about working mothers, Suzanne Venker argues that woman can’t be successful in the workplace and at home simultaneously. They can achieve the balance they so... This description may be from another edition of this product.

Published by Thriftbooks.com User , 17 years ago
An excellent and informative book! The author packs a lot of valuable information into a relatively short 170 pages and writes in a very readable style that makes the book hard to put down (both essential qualities for a busy stay at home mom of toddlers!). Ms. Venker is not against working mothers across the board, but her premise is that a mother's work should take second place to her role as mother and be fit in around her children's schedule (for example, working while the children are home with Daddy). This book is a breath of fresh air to me! I was an excellent student in college whose professors fully expected and encouraged me to plunge ahead in the academic and professional world. However, I knew that once I had children, they would become my first priority. Since that decision, I have felt the pressure and disdain of the media and of fellow mothers who believe that being a stay-at-home mom is a demeaning and foolish role. It's hard not to buy into the lie that your mind will atrophy and your professional abilities will shrivel and die while at home with your children! Ms. Venker restores my sense of equilibrium with her book. She counters the myths that the media and "gender-feminists" have tried to feed us (many of whom never had children or had them but never even tried to stay home full-time with them): 1. "Men can have it all. Why shouldn't we?" 2. "I could never stay home full-time!" 3. "You're so lucky you can stay at home!" (which disregards the substantial financial sacrifices many of us have made to do so!) 4. "I could balance work and family if I had more support." 5. "I'm a better mom for working." (I hear this one in every major woman's magazine.) 6. "My children just love daycare." (One of my working friends used this one just last weekend.) 7. "I have it all planned out." I wish every mother in America had the courage to read this book!

In defense of mothers

Published by Thriftbooks.com User , 17 years ago
The thesis of this book is simple: women can have it all, but not necessarily at the same time. That is, a woman can choose to excel at motherhood, or she can choose to excel at a career, but she cannot do both simultaneously. As such, this book attempts to burst the bubble of the super-mom myth, the idea that one can juggle both tasks, and succeed at both. Indeed, according to Venker, a working mother comes close to being a contradiction in terms. Of course a mom can work part time, and some moms, especially single moms, may have no choice about full-time employment, but for the average woman, to think that one can excel in a fantastic career path, and produce great, well-developed kids at the same time is simply wishful thinking. The first myth, "Men can have it all, so why can't we" is just that: a myth. Most men who work full time do not spend an equal amount of time with their children. In any set of relationships there are always trade-offs. Men in full time jobs trade off the privilege of having the lengthy, intimate moments with their children that a stay-at-home mother has. And it is the same if it is the mother who is working full time. Indeed, the term "working mother" in this regard is misleading. If a mother chooses a full-time paid career, she is basically leaving the job of mothering to someone else. She is paying someone else to mother her children. Another myth is that the roles of dads and moms are fully interchangeable. They are not, because men and women are not the same. There are inherent, biological differences. As Venker demonstrates, "fathers will never be parents in the same way mothers are". Thus the androgyny ideal is a furphy. To speak about completely equal roles in marriage therefore is nonsense. There is never complete equality in marriage. Instead there is give and take. There are concessions and there is bargaining. Any good partnership requires a division of labor, and women seem hard-wired by nature to have more of a nurturing, caring and, well, maternal, disposition. It is not just breast-feeding that is the mother's distinctive. Another myth is that day care is good for children. Quite the opposite is the case. The longer a child is in day care, and from an earlier age, the worse it is for the child. As one child expert has put it, "A home must be very bad before it can be bettered by a good institution". Yet we have abandoned our children in droves to strangers. Feminists have convinced many women that they can only be fulfilled and liberated if in the paid workplace. Totally absent from the debate is the needs of the child. Then there is the myth that we can give our children quality time in place of quantity time. This is just plain false. Children need our undivided attention, and they need lots of it. They do not need a committee drifting in and out of their lives. They need a mother and a father, and especially a mother during the early years of life. "What children need - what children have

Published by Thriftbooks.com User , 17 years ago
Don't shoot the messenger! The tendency to shoot the messenger if you don't like the news, is evident in the negative reviews of Suzanne Venker's excellent book. She has the courage to tell the truth even though a book telling working mothers what they want to hear - which is that they are doing the best thing for their children - would probably have a better shot at being a best seller. It is evident that her love for children, and her concern for how the care they receive will affect society, is her motivation in writing, not any political or traditionalist axe to grind. As Ms. Venker points out in Myth #5 (I'm a Better Mom for Working), however unpopular the idea may be, children's needs do not change based on their parents' economic status. As an educator and a former director of a non-profit day care center I can personally vouch for what Ms. Venker says about it being a myth that a small amount of quality time is a substitute for spending most of the day with a child. Children do just need quality time, and they need large quantities of it. They will starve on one bite a day of emotional filet mignon. I also had ample opportunity working in day care to see children's perspective on what was important in their lives. I vividly remember a mother trying to soothe her children who were upset at being left in the morning by saying, "Mommy is working so we can afford a trip to the snow on the weekend. You like trips to the snow, don't you?" With tears in his eyes the older boy, age 4, said solomnly, "No, we'd rather have you, Mom." In teaching elementary school age children, my current work, it is obvious to me which children have been raised in situations where their needs were met, and which were not. Aggression and lack of empathy are just two of the problems. This does not translate into full-time stay-at-home vs. full-time working outside the home. There is much ground in between. Ms. Venker lays out the issue of keeping a foot in the workforce very clearly, saying, "while they have young children women will have to be creative in fitting other work around their primary obligation to their children." As a writer and a mother she doesn't just talk the talk, she walks the walk. This book is not by some childless woman writing about theoretical ideas, this is someone who knows what every mother goes through in the ups and downs of raising children.Finally, as the middle-aged mother of two college students, I would urge mothers-to-be and mothers of young children to read Ms. Venker's book and then remember the cliche that's so true - they DO grow up fast. By the later grades of elementary school they won't always want to spend their free time with you. You'll have years and years to work. Much as I love my work, I've never regretted working very, very part-time while the girls were little. I sincerely hope you read and think seriously about 7 Myths of Working Mothers, and that you will be able to look back at the choices you

Published by Thriftbooks.com User , 17 years ago
What makes this book such an excellent read is the thoughtful and systematic way in which the author acknowledges and then refutes the most common justifications for moms not staying home to raise their own children. With the logical precision of a good trial lawyer, Venker takes on these prevalent myths, one by one, and shows convincingly the fallacy behind each one of them. In particular, I thought her use of various empirical studies to support her points was effective. I also liked her insightful treatment of the flawed economics of the case for moms going to work, since money is such a common justification for the decision to go back to work and leave the kids at day care. Finally, I give the author points for having the courage to say something that will not be politically popular and that will leave a lot of parents feeling uncomfortable about the choices that they have made. Yet, if it causes even just a few moms to re-think their choice about going back to work, it will be a book that was not written in vain.

Not to be missed!

Published by Thriftbooks.com User , 17 years ago
"7Myths of Working Mothers" should be required reading for anyone considering having children. Before I read it, I felt guilty about my decision to quit my job and stay at home to raise my son. My college degrees and career aside, I felt like working and having children (simultaneously) was what society expected of me as a "modern woman."Ms. Venker does not preach. She explains her views logically, and backs them up with research and evidence from a myriad of experts. That is not to say that she isn't passionate. "7 Myths of Working Mothers" made me cry sometimes, and laugh sometimes, but most of all, it made me stop second guessing myself about my decision to stay home and be a full-time mom.
Copyright © 2022 Thriftbooks.com Terms of Use | Privacy Policy | Do Not Sell My Personal Information | Accessibility Statement
ThriftBooks® and the ThriftBooks® logo are registered trademarks of Thrift Books Global, LLC