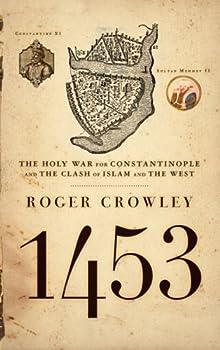 1453: The Holy War for Constantinople and the Clash of Islam and the West

A real-life Lord of the Rings

Published by Thriftbooks.com User , 12 years ago
Roger Crowley's 1453: The Holy War for Constantinople and the Clash of Islam and the West reads like a real-life The Lord of the Rings. It's action-packed and brimming with detail about the city and battle. By the middle of the novel, we get almost day-by-day blows of the fighting, as if written by a war correspondent who had witnessed the scenes. Crowley did a great service in making such a readable account of a crucial event in history. Hopefully, his engaging account will attract even readers who don't normally both with history. I would highly recommend this to anybody interested in history, or even adventure novels! (trust me, it's almost as good as Lord of the Rings).

Published by Thriftbooks.com User , 12 years ago
Like the city of Constantinople itelf, the events in this book are very complex. In his analysis of the seige, Roger Crowley skillfully follows several strings: TECHNOLOGY The Byzantines successfully defended Constantinople for centuries against repeated assaults from the Near East. When Arab forces seemed almost certain to take the city in 678, a highly-classified weapon called "Greek Fire" saved the day. Greek fire was essentially a napalm-like substance made from wet sand and surface oil found in abundance in certain areas along the Black Sea coast. When ignited and sprayed (with leather bladders) on an enemy ship, it almost guarenteed destruction of that vessel. Mastry of technology served the Byzantines well in the seventh century, but that lesson was not lost on the Turks. In preparing for the seige of 1453, the young sultan Mehmet invested substantially on new cutting-edge technologies: gun powder, and the latest metallurgical techniques to cast ever-larger cannons. In fact, Mehmet hired the services of a Hungarian master to cast him a bronze "super cannon", larger than had ever been attempted before (and which pushed the limits of the day's technology). His investment paid off handsomely, as the super cannon devestated the once-invincible city walls. If things were bad above ground, they were just as bad below. Although mining technology and its military applications were well-known by 1453, Crowley spends considerable time describing the cat-and-mouse interplay between Mehmet's hired Serbian expert miners and the Byzantine counterforces. Turkish forces employed miners to weaken the foundations of Constantinople's protective walls, and to try to establish and underground route for Jannisary soldiers to enter the city. The Greeks fought back with their own miners, who would locate the Serbs and either enter their tunnels with deadly force, or (circumstances allowing) merely collapse the tunnels with the Serbs inside. I had never heard of Medieval mining warfare techniques before, so I found this part fascinating. The maritime defense of Constantinople was no happier than the situation on land. Although cosmopolitan in nature, the city was culturally more Greek than anything else. As the original seafaring superpower, it seems natural to assume these Greeks would have primacy on the waters. Unfortunately, this is not the case. Maritime technology was on the cusp of revolution. Although small sailing and wind-powered vessels were well-known from prehistory, this technology was not easily applied to larger vessels. From the days of Thucydides, the dominant ships in both commerce and warfare were galleys powered by the muscles of men. Their superior maneuverability, and frequently superior speed, made them the preeminent nautical fighting platform. Alexander and the Romans had both ruled the Agean and the Mediterranean with oared galleys, and the Byzantines did not consider this model could be improved upon. Alas, the world was changing,

Published by Thriftbooks.com User , 13 years ago
I read this book several months ago. I waited until I had read Runciman's work, the standard book on the siege, to review this one. This seemingly forgotten book is a surprisingly good read. Although Crowley is not a historian and has a slight Turkish apologetic slant, the narrative of the actual siege is far better than Runciman's. He still believes the old myth that Greek fire was used in 1453, and much of his narrative of the events in the Turkish camp are pure speculation, and this is where he loses a star. Nonetheless, the plates are crisp and clear, the narrative is excellent and Mr. Crowley understands the physical geography of the city very well. Read this in conjunction with Runciman's book, as they compliment each other wonderfully. Crowley has some important updates from 50 years of scholarship since Runciman's book was written, and has a far more detailed account of the siege, while Runciman's has the advantage of being written by a scholar.

An Extraordinary Book for Istanbul

Published by Thriftbooks.com User , 17 years ago
1453 is one of the turning points of history. Mr.Crowley did excellent job to describe events, person, and facts related to capture of Istanbul. Two main characters Fatih Sultan Mehmet and Constantine XI are well biographied in the book. Especially Fatih's desire to take city and his preparations are very well given to the reader. Also the other characters like Zaganos Pasha, Halil Pasha, and Giovanni are given with enough detail with their contributions to the historical event. Book starts with Arab siege in 7th century and Muhammad desire of Istanbul. But the walls of Istanbul and successive defense strategies gave Byzantium a victory against them. After that Turks started to hit walls of Istanbul at the beginning of Ottoman Empire but they failed as well. Fatih Sultan Mehmet's obsession with the city starts with his early age and grows by the time. His successive use of technology, superior logistic planning, and strategy were the biggest advantages of Ottoman side. On the other hand, very charismatic and successful soldier Constantine XI was dealing with the problems of the Christianity like unity of the Church and Pope. There was big hesitation of help to Byzantium by Vatican. Mehmet's use of biggest cannon of their time and landslide of his war ship to Golden Horn were the most important points of the war and helped the Ottomans capture the city. Cannons were designed by Hungarian cannon founder Orban who offered defense of the city to Constantine XI but he got refused to due his high price. Mehmet accepted this Christian Scientist offer and paid him very well. Also Zagonos Pasha from Ottoman army was also another Christian who helped Mehmet with his aggressive offense mind. That's why I do not agree Crowley's definition to this event as Clash of Civilizations. During that time era Ottoman was also war with other Turkish and Arabic neighbors and Vatican did not make enough effort to save Istanbul due to his own interest. Istanbul was the biggest prize of their time for every commander regardless of religion. As Crowley mentioned after the fall of Istanbul there was flow of people from west to Istanbul due to free practice of religion and wealth of the city. Churches and synagogues were free to operate. Because, Mehmet's goal was not to create Islamic Empire but global empire like his idol hero Alexander the Great. In short, very well written, informative, and emotional book for the year of 1453. Everybody must read who live in Istanbul and who will visit Istanbul.

"There is no prince who has his armies and camps in better order."

Published by Thriftbooks.com User , 17 years ago
When I was a young Infantry officer, I recall a tactical instructor telling us that,"The best defence is only as good as the willingness of an enemy to make the necessary sacrifices to overcome it." I can think of few better examples of this principle than the Ottoman siege of Constantinople. I have read many books about this event and in my opinion "1453" by Roger Crowley is far-and-away the best. The book is chock-full of interesting facts about the siege and where the facts are unclear, Crowley (like Herodotus) gives us the opposing stories and lets us decide. In addition "1453" is a very readable, fast-paced history. It's one of the few history books I've read where I can honestly say I wished it was much longer. It's like an excellent novel but it's all true and a heartbreaking story to boot. I just wish I'd been able to read it before my visit to Istanbul earlier this year. I'd have kept it at my side.
Trustpilot
Copyright © 2022 Thriftbooks.com Terms of Use | Privacy Policy | Do Not Sell or Share My Personal Information | Accessibility Statement
ThriftBooks® and the ThriftBooks® logo are registered trademarks of Thrift Books Global, LLC