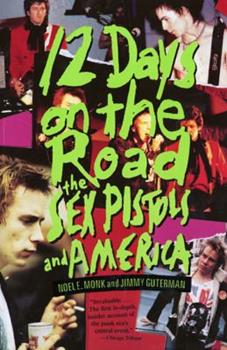 In the mid-seventies, the Sex Pistols, the most controversial rock-and-roll band ever, erupted out of London, offending everyone from members of Parliament to the rock establishment it sought to unseat. With its raw, anarchic sounds, aura of sex and violence, outrageous behavior, and concerts that frequently degenerated into near-riots, the band changed the rules of rock-and-roll forever. Add to that the early death of band member Sid Vicious, by...

Published by Thriftbooks.com User , 18 years ago
To start, a thoroughly enjoyable read. When reading about a band like the Pistols, one must beware as there are certain caveats. The main being that most of the literature written was by authors who did not know the Pistols. They weren't there! This book was (co)written by Monk. He was there for those 12 days with Sid, Johnny and, to a lesser extent, Paul and Steve.However, to be fair, this book has the events unfolding as Noel Monk saw them - there are facts in here that John Lydon disputes in his book 'Rotten' and there are also facts that Lydon would never have known (Monk knew far more than anyone about the whole Tom Forcade deal).Enjoy this book, it's one mans' version of what went on. Read the other literature and make a balanced judgement.

Published by Thriftbooks.com User , 21 years ago
I read this in one sitting. I couldn't put it down. Great anecdotes from the road (and priceless pictures). Well written.

Published by Thriftbooks.com User , 23 years ago
You're not going to get a better perspective on the phenomenon and demise of the sex pistols than this. Written by their road manager (a euphemism, really, for being nanny to Sid), this is a first-hand account on what was seen and experienced in that compact little bubble of the Pistols' tour bus. Other great writing on the Pistols can be found in Legs McNeil's Please Kill Me, Jon Savage's England's Dreaming, and Rotten's (meandering) autobiography. But this is must-read stuff: Unromanticized, a little monotonous, lots of tension. In other words: You're right there, on the bus with them.

The best book on the Sex Pistols

Published by Thriftbooks.com User , 23 years ago
A great document about life on the raod and the dissolution of the foremost band of its' day. if you want to read more about the punk movement, then read Please Kill Me by Legs mcneil and John Savage's England's Dreaming, and you're set. From the Velvets to the Voidoids is also a good addition, and the Sid Vivious essay in Nick Kent's The Dark Stuff is also essential.

How much I love this book by Stacy Bergin

Published by Thriftbooks.com User , 25 years ago
The Sex Pistols were one of the fore-fathers of punk rock in the U.K. This book chronicles the chaos and anarchy that ensued on their failed 1978 tour of America. From Johnny Rotten and Sid Vicious getting their first taste of America's police, to Paul Cook and Steve Jones' beautifully obscene appearence on a local radio show, this book tells it all. It even has a "Where are they now" part in the back. This book is the closest anyone will ever get to hearing of the Sex Pistols tour. I wasn't born yet, (not until 1982), and I felt as if I was right there with them, because the book engrosses you. It's a definite page turner, one that you just can't put down, because you're always wondering about something. "Is Sid going to die of withdrawl?" "Will Paul kill himself?" "Is Johnny going to blow up in everyone's face?" "Is Sid ever going to bathe?" It's all here. I recommend it highly
Trustpilot
Copyright © 2022 Thriftbooks.com Terms of Use | Privacy Policy | Do Not Sell or Share My Personal Information | Accessibility Statement
ThriftBooks® and the ThriftBooks® logo are registered trademarks of Thrift Books Global, LLC