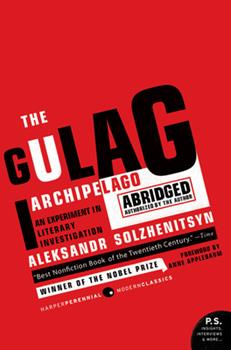 The Gulag Archipelago: The Authorized Abridgement

"BEST NONFICTION BOOK OF THE 20TH CENTURY" -- Time "It is impossible to name a book that had a greater effect on the political and moral consciousness of the late twentieth century." --David Remnick, The New Yorker The Nobel Prize winner's towering masterpiece of world literature, the searing record of four decades of terror and oppression, in one abridged volume (authorized by the author). Features a new foreword by Anne Applebaum.Drawing on his...

Published by Thriftbooks.com User , 16 years ago
It is hard to measure how profound a book like this is, because it covers such a wide range of subjects almost subtlely. The things that you are likely to remember are the descriptions of torture, the small amounts of food, and so forth. What you remember is the things that made you cringe, and realise that you probably would have given up had you been placed in the same situation. But as Solzhenitsyn tried repeatedly to bring out, it was the so-called "little" things that really either killed you, or gave you hope. As an example, many people might recall the sticking of hot metal up certain areas of the human anatomy; but as Solzehnitsyn said, this was most often not necessary. Seemingly mundane (relatively speaking) things like sleep deprivation was enough to drive even the most stable men insane. It was not the hot flash of pain that would get most people, but the exhaustion of wakefulness. Monotony could be every bit as much your enemy as freezing temperatures; and it was just as likely to send you to your death. These are but two examples, Solzehnitsyn gives up many more. If there is any book that can and should be read by everyone, it is this book. One need not be interested in communism, political theory, or such things for this book to have meaning. This book is above all about the human condition. It is a biograpy and autobiography about every man who has ever suffered greatly, and it is a lesson to every man who has never suffered greatly.

The Gulag Archipelago: A Couragous Gift

Published by Thriftbooks.com User , 16 years ago
This book is a beutiful piece of literature and history. It was also written while on the run from the most devastating goverment in existence. The book is much more intresting to read, literature wise, than most academic works. The truth of the horrible soviet conditions in the gulag and the horrible and equally evil denial of the west that these things happened. This is a book that should be read in many places, at least in Russia, and for anyone else who truly wants to understand human life and the history of humanity.

A voyage through hell

Published by Thriftbooks.com User , 17 years ago
"The line between good and evil runs through the heart of every human being." This abridged edition of Solzhenitsyn's hauntingly intimate portrait of his own arrest, interrogation, imprisonment, rebellion, and eventual release during Stalin's purges is a book like no other. This book, written by a constantly watched and persecuted dissident - bent but not broken by the brutality of Stalinist work camps, shares the author's (and his other inmates') personal experiences falling into this dark, usually fatal, abyss. Solzhenitsyn's original work was published in 1971 and produced an absolutely damning indictment of communism in Russia. Indeed, the stunning quality and importance of his writing earned him a Nobel prize. Besides his own experiences, Solzhenitsyn collected personal stories from hundreds of his fellow inmates. The sadism of interrogators, the cruelty of guards, the indifference of neighbors, the paranoia of the public, the betrayal of stoolies, and the true comradery of innocent inmates are presented in vivid, factual detail. In addition to this, the author also presents an encyclopeadic knowledge of the entirety of the gigantic Stalinist security apparatus (normal labor camps, special labor camps, transfer camps, railroad transfers, prisons, holding cells, interrogation cells, NKVD, SMERSH, commissars, exile communities, and still more). But at the heart of it all, the book remains an unforgettable journey through man-made hell. Stalin meant to destroy every man, woman, and child arrested, regardless of their innocence, and he largely succeeded. But survivors like Solzhenitsyn did truly 'tear down the wall' and made this world a far better place to live in. We all owe him a huge debt of gratitude!

The Most Important Nonfiction Work of the 20th Century

Published by Thriftbooks.com User , 17 years ago
How thin is the veil we call Civilization!! This book is indeed a tedious read by virtue of its length. However, Solzhenitsyn's history is written with the prosaic style of a Tolstoy or Dostoyevsky. Aleksandr Solzhenitsyn was a Captain in the Soviet Army as it charged through Nazi occupied Poland when he was arrested on trumped-up charges in February 1945. Thus began his odyssey through Gulag, "the country within a country". The perpetually weak economy of Communism could not survive without the forced labor of millions of is own citizens who became prisoners for one reason or another, or no reason at all. Solzhenitsyn relates his own experiences as well as those of other prisoners with whom he became acquainted while incarcerated. He relates how ordinary Russians were arrested and charged with fraudulent charges (if charged at all), interrogated, tortured and forced to confess under extreme duress, and sent off to labor for the good of the Motherland. Throughout the book, Solzhenitsyn asks the reader incredulously, "how did we let this happen?" That is no doubt one of the most important questions posed in all of human history. If we study history in order to prevent the repetition of our mistakes, then Solzhenitsyn's work should be required reading of all residents of Planet Earth.

this book changed my life

Published by Thriftbooks.com User , 18 years ago
It is a marvel to flip through this book again, though the abridged version is nothing compared to the original 3-volume trilogy. Though it is very difficult to get into - in the original v1 there is a long abstract section on gulags as a sewage system in turbid prose - once the reader gets swept into thos narrative of suffering there is no other reading experience like it. Solzhenitsyn spent his youth as a gulag prisoner for having criticized Stalin on a postcard. V1 covers his arrest and interrogation and transport into despair and disillusionment. What he experienced, from his start as a strong and idealistic young war leader, can only be described as hell on earth. Only Hitler's death factories could compare, and yet Stalin's slave labor camps were being held up as marvels of social policy and redemption. The cruelty of treatment, the insights into the astonishing characters around him, and the compilation of other people's stories - Solzhenitsyn describes his experience as only one gulp from an ocean of bitterness and shattered lives - are unequalled in the modern literature on totalitarianism. My experience was to be utterly transported into this realm, to look at my life and values and think about what mattered most to develop within myself. No other book ever had a deeper impact on me. That makes this, in my opinion, essential reading to understand the last century at its very very worst.The second volume follows Solzhenitsyn as he becomes a hardened and grief-stricken prison slave, indifferent to whether he is killed by a stray bullet during riots and abandoning his faith in communism. A central pert of the book is his religious conversion - the only one I ever read about that I truly understood on an emotional level - at the deathbed of perhaps his greatest freind. V3 covers his relesase from prison and his attempts to rebuild his life. All three volumes offered to me the experience of living totally outside of myself and in the reality of a totalitarian state. I first read these in EUrope when they appeared, and the debates on the merits of the communist sytem were very much alive at the time. Now they are only of historical interest, but I still think they are must reading for anyone who wants to understand the worst of one of the most tumultuous centuries in the history of mankind.Highest recommendation.
Copyright © 2022 Thriftbooks.com Terms of Use | Privacy Policy | Do Not Sell My Personal Information | Accessibility Statement
ThriftBooks® and the ThriftBooks® logo are registered trademarks of Thrift Books Global, LLC